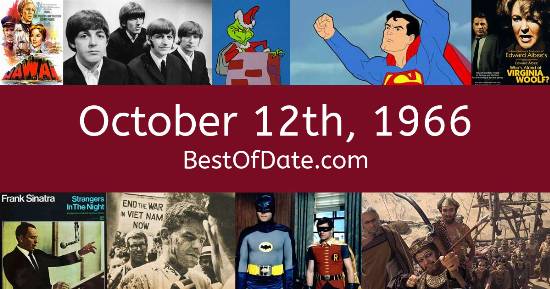 Songs that were on top of the music singles charts in the USA and the United Kingdom on October 12th, 1966.

The date is October 12th, 1966 and it's a Wednesday. Anyone born today will have the star sign Libra. The summer is long gone. Temperatures have started to become much cooler and the evenings are beginning to get darker.

Fallen leaves have carpeted driveways, lawns, pathways and sidewalks and there's a fresh earthy scent in the ear. In America, the song Cherish by Assocation is on top of the singles charts. Over in the UK, Distant Drums by Jim Reeves is the number one hit song.

Celebrities, historical figures and notable people who were born on the 12th of October.

Lyndon Baines Johnson was the President of the United States on October 12th, 1966.

Harold Wilson was the Prime Minister of the United Kingdom on October 12th, 1966.

Enter your date of birth below to find out how old you were on October 12th, 1966.

Here are some fun statistics about October 12th, 1966.

Leave a comment and tell everyone why October 12th, 1966 is important to you.