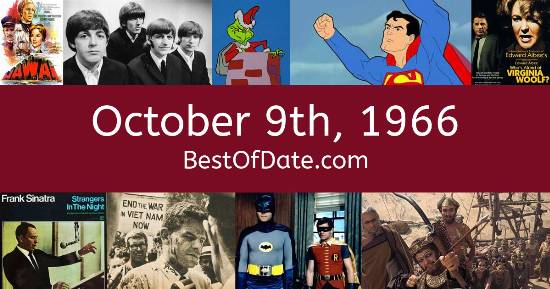 These songs were on top of the music charts in the United States and the United Kingdom on October 9th, 1966.

The movie "Doctor Zhivago" was at the top of the Box Office on October 9th, 1966.

The date is October 9th, 1966, and it's a Sunday. Anyone born today will have the star sign Libra. Currently, people are enjoying their weekend.

The summer is long gone. Temperatures have started to become much cooler and the evenings are beginning to get darker. Fallen leaves have carpeted driveways, lawns, pathways and sidewalks and there's a fresh earthy scent in the ear. In America, the song Cherish by The Assocation is on top of the singles charts.

Over in the UK, Distant Drums by Jim Reeves is the number one hit song. Lyndon Baines Johnson is currently the President of the United States, and the movie Doctor Zhivago is at the top of the Box Office. In the United Kingdom, Harold Wilson is the current Prime Minister.

Because it is 1966, radio stations are playing hit songs from music artists such as Frank Sinatra, The Beatles, The Beach Boys, SSgt Barry Sadler, The Association and The Supremes. In fashion, a new "hippie subculture" has emerged, bringing with it laid back Bohemian styles. Frayed bell-bottomed jeans, Jesus sandals, crushed velvet suits and bright tie-dye t-shirts are all popular items of clothing at the moment. A religious film called "The Bible: In the Beginning..." is currently being shown in movie theaters.

If you were to travel back to this day, notable figures such as Walt Disney, Che Guevara and Otis Redding would all be still alive. On TV, people are watching popular shows such as "The Ed Sullivan Show", "Gunsmoke", "Where the Action Is" and "Batman". Kids and teenagers are watching TV shows such as "Captain Pugwash", "Hoppity Hooper", "Cool McCool" and "The New Adventures of Superman".

If you're a kid or a teenager, then you're probably playing with toys such as Mouse Trap, Operation, Major Matt Mason (action figure) and Suzy Homemaker.

These are trending news stories and fads that were prevalent at this time. These are topics that would have been in the media on October 9th, 1966.

News stories and other events that happened around October 9th, 1966.

Check out our personality summary for people who were born on October 9th, 1966.

Television shows that people were watching in October, 1966.

If you are looking for some childhood nostalgia, then you should check out October 9th, 1972 instead.

Wrestler. Deceased
Born on October 9th, 1967
He was born exactly one year after this date.

Rapper. Deceased
Born on October 9th, 1977
He was born exactly 11 years after this date.

Lyndon Baines Johnson was the President of the United States on October 9th, 1966.

Harold Wilson was the Prime Minister of the United Kingdom on October 9th, 1966.

Find out what your age was on October 9th, 1966, by entering your DOB below.
This information is not saved on our server.

Here are some fun statistics about October 9th, 1966.