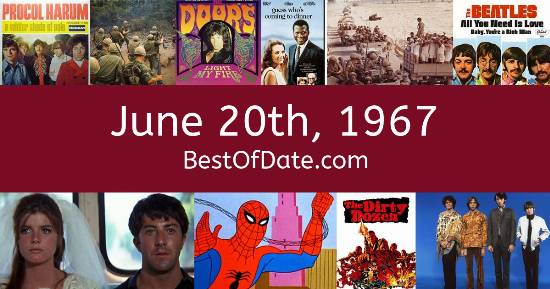 These songs were on top of the music charts in the United States and the United Kingdom on June 20th, 1967.

The top "Box Office" movie on this date was the film "Thoroughly Modern Millie".

The date is June 20th, 1967, and it's a Tuesday. Anyone born today will have the star sign Gemini. It's summer, so the temperatures are warmer and the evenings are longer than usual.

In America, the song Groovin' by Young Rascals is on top of the singles charts. Over in the UK, A Whiter Shade Of Pale by Procol Harum is the number one hit song. Lyndon Baines Johnson is currently the President of the United States, and the movie Thoroughly Modern Millie is at the top of the Box Office.

A war film called "The Dirty Dozen" is being shown in movie theaters at the moment. If you were to travel back to this day, notable figures such as Jayne Mansfield, Che Guevara, Otis Redding and Martin Luther King would all be still alive. On TV, people are watching popular shows such as "The Ed Sullivan Show", "Bonanza", "Batman" and "Dark Shadows".

Children and teenagers are currently watching television shows such as "Top Cat", "Milton the Monster", "Cool McCool" and "The New Adventures of Superman". Popular toys at the moment include the likes of Operation, Captain Action (action figure), Major Matt Mason (action figure) and Suzy Homemaker.

These are trending news stories and fads that were prevalent at this time. These are topics that would have been in the media on June 20th, 1967.

Check out our personality summary for people who were born on June 20th, 1967.

If you are looking for some childhood nostalgia, then you should check out June 20th, 1973, instead.

Celebrities, historical figures, and other notable people who were born on June 20th.

Lyndon Baines Johnson was the President of the United States on June 20th, 1967.

Enter your date of birth below to find out how old you were on June 20th, 1967.
This information is not transmitted to our server.