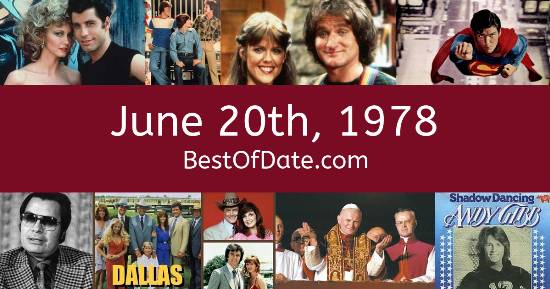 These songs were on top of the music charts in the United States and the United Kingdom on June 20th, 1978.

The top "Box Office" movie on this date was the film "Damien: Omen II".

The date is June 20th, 1978, and it's a Tuesday. Anyone born today will have the star sign Gemini. It's summer, so the temperatures are warmer and the evenings are longer than usual.

In America, the song Shadow Dancing by Andy Gibb is on top of the singles charts. Over in the UK, You're The One That I Want by John Travolta & Olivia Newton-John is the number one hit song. Jimmy Carter is currently the President of the United States, and the movie Damien: Omen II is at the top of the Box Office.

In Argentina, the 1978 FIFA World Cup is currently taking place. A musical romantic comedy film called "Grease" is being played in movie theaters at the moment. If you were to travel back to this day, notable figures such as Keith Moon, Sid Vicious and John Wayne would all be still alive.

On TV, people are watching popular shows such as "The Waltons", "Starsky & Hutch", "Laverne & Shirley" and "What's Happening!!". Meanwhile, gamers are playing titles such as "Pursuit", "Gun Fight" and "Breakout". Kids and teenagers are watching TV shows such as "Mister Rogers' Neighborhood", "The Pink Panther Show", "The All-New Super Friends Hour" and "Fred Flintstone and Friends".

If you're a kid or a teenager, then you're probably playing with toys such as Troll doll, Micronauts, Stretch Armstrong and Water Ring Toss.

These are trending news stories and fads that were prevalent at this time. These are topics that would have been in the media on June 20th, 1978.

Check out our personality summary for people who were born on June 20th, 1978.

Television shows that people were watching in June, 1978.

Popular video games that people were playing in June of 1978.

If you are looking for some childhood nostalgia, then you should check out June 20th, 1984 instead.

Jimmy Carter was the President of the United States on June 20th, 1978.

James Callaghan was the Prime Minister of the United Kingdom on June 20th, 1978.

Enter your date of birth below to find out how old you were on June 20th, 1978.
This information is not transmitted to our server.