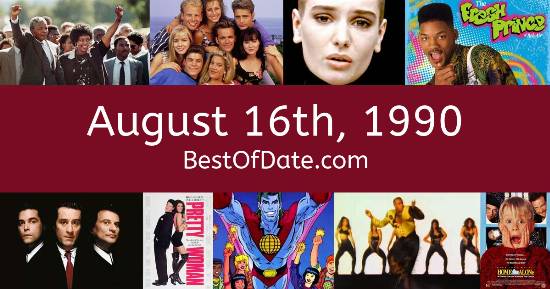 Songs that were on top of the music singles charts in the USA and the United Kingdom on August 16th, 1990.

The date is August 16th, 1990 and it's a Thursday. Anyone born today will have the star sign Leo. It's summer, so the temperatures are warmer and the evenings are longer than usual.

In America, the song Vision Of Love by Mariah Carey is on top of the singles charts. Over in the UK, Turtle Power by Partners in Kryme is the number one hit song. George W. Bush Snr. is currently the President of the United States and the movie Flatliners is at the top of the Box Office.

In the Middle East, Iraqi forces have invaded the neighboring country of Kuwait. The invasion has received widespread condemnation from the international community and the UN Security Council is currently demanding that Saddam Hussein withdraw his forces from the country. On TV, people are watching popular shows such as "Murder, She Wrote", "Charles in Charge", "Star Trek: The Next Generation" and "Blossom". Meanwhile, gamers are playing titles such as "Duck Hunt", "Batman: The Video Game", "World Cup Italia '90" and "Phantasy Star II".

If you are looking for some childhood nostalgia, then check out August 16th, 1996 instead.

George W. Bush Snr. was the President of the United States on August 16th, 1990.

Margaret Thatcher was the Prime Minister of the United Kingdom on August 16th, 1990.

Enter your date of birth below to find out how old you were on August 16th, 1990.