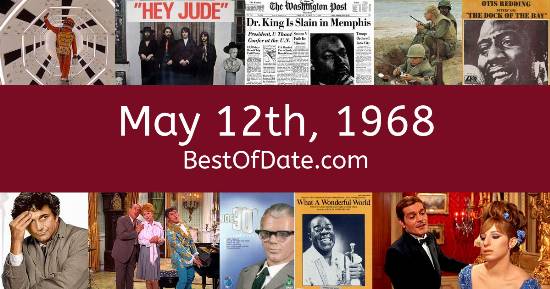 These songs were on top of the music charts in the United States and the United Kingdom on May 12th, 1968.

The movie "The Graduate" was at the top of the Box Office on this day.

The date is May 12th, 1968, and it's a Sunday. Anyone born today will have the star sign Taurus. Currently, people are enjoying their weekend.

The summer of 1968 has finally arrived. The weather has warmed up and the evenings are brighter than usual. In America, the song Honey by Bobby Goldsboro is on top of the singles charts. Over in the UK, What A Wonderful World by Louis Armstrong is the number one hit song.

Lyndon Baines Johnson is currently the President of the United States, and the movie The Graduate is at the top of the Box Office. In the United Kingdom, Harold Wilson is the current Prime Minister. In fashion, a new "hippie subculture" has emerged, bringing with it laid back Bohemian styles. Frayed bell-bottomed jeans, Jesus sandals, crushed velvet suits and bright tie-dye t-shirts are all popular items of clothing at the moment.

It's 1968, so radio stations are playing hit songs from artists such as The Beatles, Louis Armstrong, Otis Redding, The Rolling Stones, Bobby Goldsboro and Marvin Gaye. A comedy film called "The Odd Couple" is currently being shown in movie theaters. If you were to travel back to this day, notable figures such as Helen Keller, Robert F. Kennedy, Ramon Novarro and Dwight D. Eisenhower would all be still alive.

On TV, people are watching popular shows such as "The Ed Sullivan Show", "Gunsmoke", "I Dream of Jeannie" and "Dark Shadows". Children and teenagers are currently watching television shows such as "Looney Tunes", "The Gumby Show", "My Three Sons" and "The Bugs Bunny Show". Popular toys at the moment include the likes of Matchbox toy cars, the Easy-Bake Oven, Rock 'Em Sock 'Em Robots and Major Matt Mason (action figure).

These are trending news stories and fads that were prevalent at this time. These are topics that would have been in the media on May 12th, 1968.

Check out our personality summary for people who were born on May 12th, 1968.

Television shows that people were watching in May, 1968.

If you are looking for some childhood nostalgia, then you should check out May 12th, 1974 instead.

Rugby player. Deceased
Born on May 12th, 1975
He was born exactly 7 years after this date.

Brazilian soccer player.
Born on May 12th, 1988
He was born exactly 20 years after this date.

American YouTuber. Deceased
Born on May 12th, 1990
He was born exactly 22 years after this date.

Child actor. Deceased
Born on May 12th, 1995
He was born exactly 27 years after this date.

Lyndon Baines Johnson was the President of the United States on May 12th, 1968.

Enter your date of birth below to find out how old you were on May 12th, 1968.
This information is not transmitted to our server.