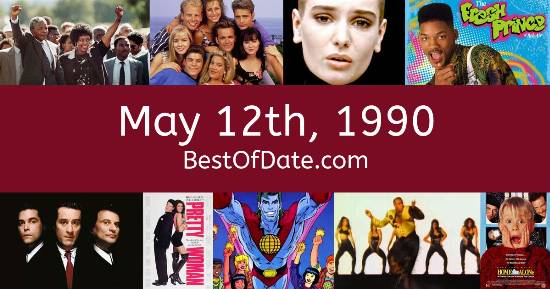 These songs were on top of the music charts in the United States and the United Kingdom on May 12th, 1990.

The date is May 12th, 1990, and it's a Saturday. Anyone born today will have the star sign Taurus. Currently, people are enjoying their weekend.

George W. Bush Snr. is currently the President of the United States, and the movie Pretty Woman is at the top of the Box Office. In the United Kingdom, Margaret Thatcher is the current Prime Minister. Texting is not a thing yet. Instead, people are using landline phones and pagers. Furthermore, the vast majority of people still have no idea what "the Internet" is.

In fashion, many of the trends from the late 80s are still popular. Colored tights, denim overalls, leotards, flannel shirts and shoulder pads are all fashionable at the moment. It's 1990, so the airwaves are being dominated by music artists such as Sinéad O'Connor, Paula Abdul, Janet Jackson, Vanilla Ice, Mariah Carey, Stevie B, Madonna and MC Hammer. A new game called "Final Fantasy III" has just been released on the Nintendo Entertainment System.

Italy have just won the Eurovision Song Contest with the song "Insieme: 1992" by Toto Cutugno. The Soviet Union is continuing to dissolve as Latvia declares its independence from the USSR. Meanwhile, Estonia has reinstated its national flag and declared itself as a republic. If you were to travel back to this day, notable figures such as Sammy Davis, Jr, Stevie Ray Vaughan, Roald Dahl and John Bardeen would all be still alive.

On TV, people are watching popular shows such as "Only Fools and Horses", "Cheers", "'Allo 'Allo!" and "Married... with Children". Meanwhile, gamers are playing titles such as "Duck Hunt", "The Revenge of Shinobi", "Batman: The Video Game" and "Phantasy Star II". Children and teenagers are currently watching television shows such as "Alvin and the Chipmunks", "The Real Ghostbusters", "Hey Dude" and "Beetlejuice".

If you're a kid or a teenager, then you're probably playing with toys such as the Easy-Bake Oven, Popples, Boglins (hand puppets) and the Ghostbusters Proton Pack.

These are trending news stories and fads that were prevalent at this time. These are topics that would have been in the media on May 12th, 1990.

Check out our personality summary for people who were born on May 12th, 1990.

If you are looking for some childhood nostalgia, then you should check out May 12th, 1996, instead.

Celebrities, historical figures, and other notable people who were born on May 12th.

Child actor. Deceased
Born on May 12th, 1995
He was born exactly 5 years after this date.

Historical weather information for May 12th, 1990.

Enter your date of birth below to find out how old you were on May 12th, 1990.
This information is not transmitted to our server.