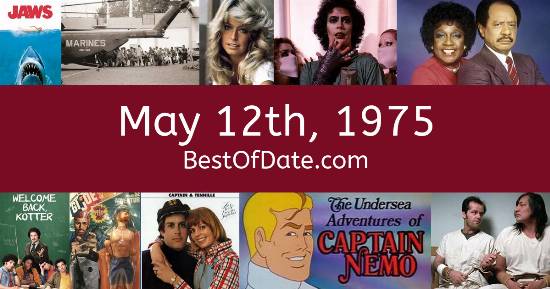 These songs were on top of the music charts in the United States and the United Kingdom on May 12th, 1975.

The movie "Alice Doesn't Live Here Anymore" was at the top of the Box Office on this day.

The date is May 12th, 1975, and it's a Monday. Anyone born today will have the star sign Taurus. The summer of 1975 has finally arrived. The weather has warmed up and the evenings are brighter than usual.

In America, the song He Don't Love You by Tony Orlando & Dawn is on top of the singles charts. Over in the UK, Stand By Your Man by Tammy Wynette is the number one hit song. Gerald Ford is currently the President of the United States, and the movie Alice Doesn't Live Here Anymore is at the top of the Box Office.

If you were to travel back to this day, notable figures such as Eamon de Valera, Sal Mineo, Anissa Jones and Rosalind Russell would all be still alive. On TV, people are watching popular shows such as "Columbo", "M*A*S*H", "Barnaby Jones" and "Happy Days". Meanwhile, gamers are playing titles such as "Space Race", "Gotcha", "Tank" and "Pursuit".

Kids and teenagers are watching TV shows such as "Mister Rogers' Neighborhood", "All in the Family", "Star Trek: The Animated Series" and "Bagpuss". Popular toys at the moment include the likes of Operation, Big Jim (action figure), Baby Alive (doll) and Shrinky Dinks.

These are trending news stories and fads that were prevalent at this time. These are topics that would have been in the media on May 12th, 1975.

Check out our personality summary for people who were born on May 12th, 1975.

If you are looking for some childhood nostalgia, then you should check out May 12th, 1981, instead.

Celebrities, historical figures, and other notable people who were born on May 12th.

Brazilian soccer player.
Born on May 12th, 1988
He was born exactly 13 years after this date.

American YouTuber. Deceased
Born on May 12th, 1990
He was born exactly 15 years after this date.

Child actor. Deceased
Born on May 12th, 1995
He was born exactly 20 years after this date.

Gerald Ford was the President of the United States on May 12th, 1975.

Enter your date of birth below to find out how old you were on May 12th, 1975.
This information is not transmitted to our server.