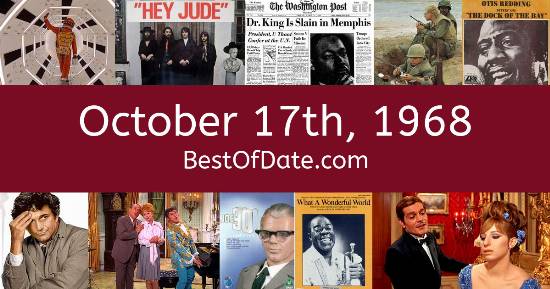 These songs were on top of the music charts in the United States and the United Kingdom on October 17th, 1968.

The movie "Barbarella" was at the top of the Box Office on this day.

The date is October 17th, 1968, and it's a Thursday. Anyone born today will have the star sign Libra. The summer is long gone. Temperatures have started to become much cooler and the evenings are beginning to get darker.

Fallen leaves have carpeted driveways, lawns, pathways and sidewalks and there's a fresh earthy scent in the ear. In America, the song Hey Jude by The Beatles is on top of the singles charts. Over in the UK, Those Were The Days by Mary Hopkin is the number one hit song.

Lyndon Baines Johnson is currently the President of the United States, and the movie Barbarella is at the top of the Box Office. In the United Kingdom, Harold Wilson is the current Prime Minister. In fashion, a new "hippie subculture" has emerged, bringing with it laid back Bohemian styles. Frayed bell-bottomed jeans, Jesus sandals, crushed velvet suits and bright tie-dye t-shirts are all popular items of clothing at the moment.

It's 1968, so radio stations are playing hit songs from artists such as The Beatles, Louis Armstrong, Otis Redding, The Rolling Stones, Bobby Goldsboro and Marvin Gaye. An action-thriller film called "Bullitt", starring Steve McQueen, is currently being shown in movie theaters. If you were to travel back to this day, notable figures such as Dwight D. Eisenhower, Judy Garland, Brian Jones and Sharon Tate would all be still alive.

On TV, people are watching popular shows such as "The Ed Sullivan Show", "Gunsmoke", "Bonanza" and "Hawaii Five-O". Children and teenagers are currently watching television shows such as "Heckle and Jeckle", "Birdman and the Galaxy Trio", "Skippy the Bush Kangaroo" and "Joe 90". Popular toys at the moment include the likes of Troll doll, the Easy-Bake Oven, Best of the West (action figures) and Lite-Brite.

These are trending news stories and fads that were prevalent at this time. These are topics that would have been in the media on October 17th, 1968.

News stories and other events that happened around October 17th, 1968.

Check out our personality summary for people who were born on October 17th, 1968.

If you are looking for some childhood nostalgia, then you should check out October 17th, 1974 instead.

Singer.
Born on October 17th, 1969
He was born exactly one year after this date.

Irish politician.
Born on October 17th, 1986
He was born exactly 18 years after this date.

Brazilian MMA fighter.
Born on October 17th, 1989
He was born exactly 21 years after this date.

Lyndon Baines Johnson was the President of the United States on October 17th, 1968.

Harold Wilson was the Prime Minister of the United Kingdom on October 17th, 1968.

Find out what your age was on October 17th, 1968, by entering your DOB below.
This information is not saved on our server.

Here are some fun statistics about October 17th, 1968.