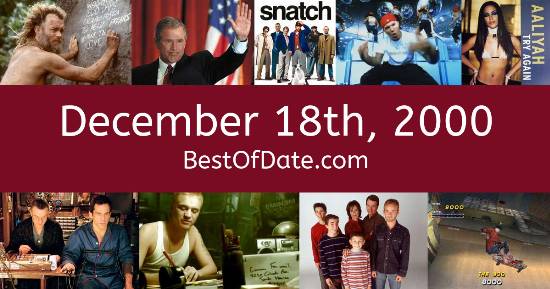 Songs that were on top of the music singles charts in the USA and the United Kingdom on December 18th, 2000.

The date is December 18th, 2000 and it's a Monday. Anyone born today will have the star sign Sagittarius. The Christmas season of 2000 is in full swing. The decorations are up and festive songs are playing on the radio.

In America, the song Independent Women Part 1 by Destiny's Child is on top of the singles charts. Over in the UK, Stan by Eminem is the number one hit song. Bill Clinton is currently the President of the United States and the movie What Women Want is at the top of the Box Office.

In the United Kingdom, Tony Blair is the current Prime Minister. It's the year 2000, so the music charts are being dominated by the likes of Christina Aguilera, Faith Hill, Savage Garden, Destiny's Child, Santana, Sisqó, Creed, Aaliyah and Enrique Iglesias. The Nokia 3310 is one of the most popular cell phones on the market at the moment. Stores across the world are currently selling a wide range of custom covers for the phone.

Kids and teenagers are watching TV shows such as "Sabrina the Teenage Witch", "Recess", "Dawson's Creek" and "SpongeBob SquarePants". If you're a kid or a teenager, then you're probably playing with toys such as Groovy Girls, the Dreamcast, Poo-Chi (robot dog) and the PlayStation 2.

Bill Clinton was the President of the United States on December 18th, 2000.

Tony Blair was the Prime Minister of the United Kingdom on December 18th, 2000.

Enter your date of birth below to find out how old you were on December 18th, 2000.

Here are some fun statistics about December 18th, 2000.

Leave a comment and tell everyone why December 18th, 2000 is important to you.