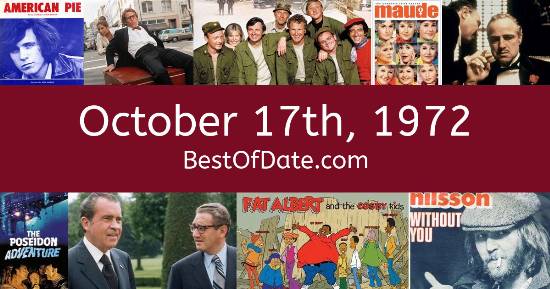 These songs were on top of the music charts in the United States and the United Kingdom on October 17th, 1972.

The movie "The New Centurions" was at the top of the Box Office on this day.

The date is October 17th, 1972, and it's a Tuesday. Anyone born today will have the star sign Libra. The summer is long gone. Temperatures have started to become much cooler and the evenings are beginning to get darker.

Fallen leaves have carpeted driveways, lawns, pathways and sidewalks and there's a fresh earthy scent in the ear. In America, the song Ben by Michael Jackson is on top of the singles charts. Over in the UK, Mouldy Old Dough by Lt. Pigeon is the number one hit song.

Richard Nixon is currently the President of the United States, and the movie The New Centurions is at the top of the Box Office. In the United Kingdom, Edward Heath is the current Prime Minister. In fashion, the hippie look from the 1960s is still popular. Clothing items such as tie dye shirts, bell-bottoms, midi skirts, gauchos and Mexican blouses are being worn by women. Meanwhile, men are wearing dark satin shirts, ethnic-looking tunics, bell bottom jeans, tweed sports jackets and turtlenecks.

It's 1972, so radio stations are playing songs from artists such as Don McLean, Harry Nilsson, Hot Butter, Neil Young, The Moody Blues, Roberta Flack, Bill Withers and Johnny Nash. Incumbent Republican president Richard Nixon and Democratic Party candidate George McGovern are facing off against each other in the run up to the 1972 US Presidential Election. If you were to travel back to this day, notable figures such as Jackie Robinson, Janet Munro, Harry S. Truman and Lyndon B. Johnson would all be still alive.

On TV, people are watching popular shows such as "Adam-12", "Marcus Welby, M.D.", "Medical Center" and "The Partridge Family". Children and teenagers are currently watching television shows such as "My Three Sons", "The Bugs Bunny Show", "Skippy the Bush Kangaroo" and "The Pink Panther Show". Popular toys at the moment include the likes of Troll doll, Lite-Brite, VertiBird (toy helicopter) and the Rock Flowers dolls.

These are trending news stories and fads that were prevalent at this time. These are topics that would have been in the media on October 17th, 1972.

News stories and other events that happened around October 17th, 1972.

Check out our personality summary for people who were born on October 17th, 1972.

If you are looking for some childhood nostalgia, then you should check out October 17th, 1978 instead.

Irish politician.
Born on October 17th, 1986
He was born exactly 14 years after this date.

Brazilian MMA fighter.
Born on October 17th, 1989
He was born exactly 17 years after this date.

Richard Nixon was the President of the United States on October 17th, 1972.

Find out what your age was on October 17th, 1972, by entering your DOB below.
This information is not saved on our server.

Here are some fun statistics about October 17th, 1972.