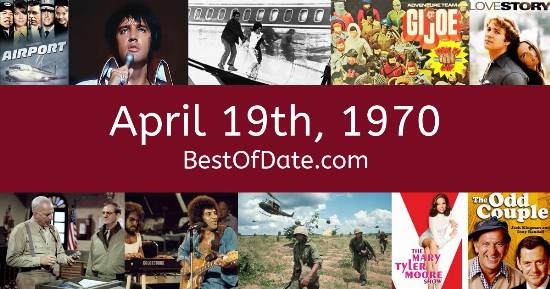 Songs that were on top of the music singles charts in the USA and the United Kingdom on April 19th, 1970.

The date is April 19th, 1970 and it's a Sunday. Anyone born today will have the star sign Aries. Currently, people are enjoying their weekend.

The summer of 1970 is drawing closer and temperatures have started to rise. In America, the song Let It Be by The Beatles is on top of the singles charts. Over in the UK, All Kinds Of Everything by Dana is the number one hit song.

Richard Nixon is currently the President of the United States and the movie The Prime of Miss Jean Brodie is at the top of the Box Office. In the United Kingdom, Harold Wilson is the current Prime Minister. It's 1970, so radio stations are playing hit songs from artists such as Elvis Presley, Mungo Jerry, Shocking Blue, Diana Ross, Simon & Garfunkel, The Jackson 5 and The Carpenters.

In fashion, the hippie look from the 1960s is still popular. Clothing items such as tie dye shirts, bell-bottoms, midi skirts, gauchos and Mexican blouses are being worn by women. Meanwhile, men are wearing dark satin shirts, ethnic-looking tunics, bell bottom jeans, tweed sports jackets and turtlenecks. On TV, people are watching popular shows such as "The Ed Sullivan Show", "Columbo.", "Here's Lucy" and "The Brady Bunch". Kids and teenagers are watching TV shows such as "Lassie", "Captain Kangaroo", "My Three Sons" and "Skippy the Bush Kangaroo".

If you're a kid or a teenager, then you're probably playing with toys such as Etch A Sketch, Army men, Battleship (game) and Crissy (doll).

If you are looking for some childhood nostalgia, then check out April 19th, 1976 instead.

American actor.
Born on April 19th, 1978
He was born exactly 8 years after this date.

American actress.
Born on April 19th, 1979
She was born exactly 9 years after this date.

English soccer player.
Born on April 19th, 1987
He was born exactly 17 years after this date.

Internet personality.
Born on April 19th, 2002
She was born exactly 32 years after this date.

Richard Nixon was the President of the United States on April 19th, 1970.

Harold Wilson was the Prime Minister of the United Kingdom on April 19th, 1970.

Enter your date of birth below to find out how old you were on April 19th, 1970.