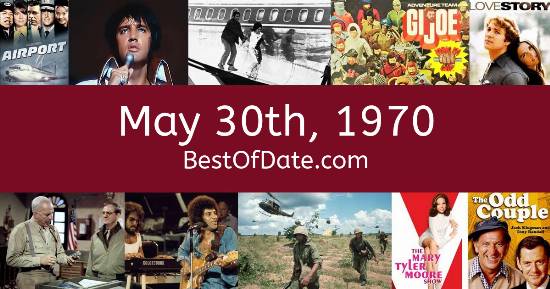 Songs that were on top of the music singles charts in the USA and the United Kingdom on May 30th, 1970.

The date is May 30th, 1970 and it's a Saturday. Anyone born today will have the star sign Gemini. Currently, people are enjoying their weekend.

The summer of 1970 has finally arrived. The weather has warmed up and the evenings are brighter than usual. In America, the song Everything Is Beautiful by Ray Stevens is on top of the singles charts. Over in the UK, Back Home by England World Cup Squad is the number one hit song.

In fashion, the hippie look from the 1960s is still popular. Clothing items such as tie dye shirts, bell-bottoms, midi skirts, gauchos and Mexican blouses are being worn by women. Meanwhile, men are wearing dark satin shirts, ethnic-looking tunics, bell bottom jeans, tweed sports jackets and turtlenecks. An air disaster film called "Airport" is currently being shown in movie theaters. On TV, people are watching popular shows such as "The Ed Sullivan Show", "Bonanza", "Columbo." and "The Courtship of Eddie's Father".

Kids and teenagers are watching TV shows such as "Captain Kangaroo", "The Bugs Bunny Show", "The Perils of Penelope Pitstop" and "The Brady Bunch". Popular toys at the moment include the likes of Etch A Sketch, Army men, Clackers and G.I. Joe Adventure Team.

Notable events that occurred around May 30th, 1970.

If you are looking for some childhood nostalgia, then check out May 30th, 1976 instead.

Richard Nixon was the President of the United States on May 30th, 1970.

Harold Wilson was the Prime Minister of the United Kingdom on May 30th, 1970.