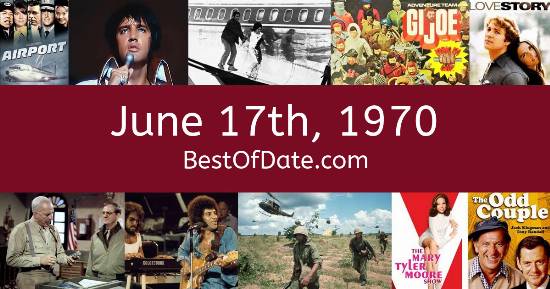 Songs that were on top of the music singles charts in the USA and the United Kingdom on June 17th, 1970.

The date is June 17th, 1970 and it's a Wednesday. Anyone born today will have the star sign Gemini. It's summer, so the temperatures are warmer and the evenings are longer than usual.

In America, the song The Long And Winding Road by The Beatles is on top of the singles charts. Over in the UK, In The Summertime by Mungo Jerry is the number one hit song. Richard Nixon is currently the President of the United States and Harold Wilson is the Prime Minister of the United Kingdom.

On TV, people are watching popular shows such as "The Ed Sullivan Show", "Bonanza", "Columbo." and "Marcus Welby, M.D.". Children and teenagers are currently watching television shows such as "The Bugs Bunny Show", "The Pink Panther Show", "Sesame Street" and "The Clangers". Popular toys at the moment include the likes of Etch A Sketch, Ken (doll), the Easy-Bake Oven and Battleship (game).

Richard Nixon was the President of the United States on June 17th, 1970.

Harold Wilson was the Prime Minister of the United Kingdom on June 17th, 1970.

Leave a comment and tell everyone why June 17th, 1970 is important to you.