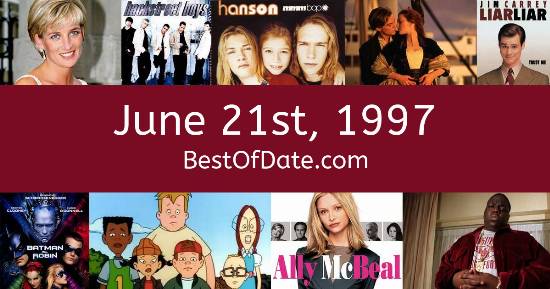 These songs were on top of the music charts in the United States and the United Kingdom on June 21st, 1997.

The date is June 21st, 1997, and it's a Saturday. Anyone born today will have the star sign Cancer. Currently, people are enjoying their weekend.

It's summer, so the temperatures are warmer and the evenings are longer than usual. In America, the song I'll Be Missing You by Puff Daddy & Faith Evans is on top of the singles charts. Over in the UK, Mmmbop by Hanson is the number one hit song.

Bill Clinton is currently the President of the United States, and the movie Batman and Robin is at the top of the Box Office. In the United Kingdom, Tony Blair is the current Prime Minister. A new form of communication called "text messaging" is continuing to grow in popularity. However, it can only be done if both the sender and the receiver are on the same cell network.

It's 1997, so radio stations are being dominated by the likes of Toni Braxton, the Spice Girls, Puff Daddy, No Doubt, Hanson and Elton John. If you were to travel back to this day, notable figures such as Gianni Versace, Princess Diana, Mother Teresa and John Denver would all be still alive. On TV, people are watching popular shows such as "Beavis and Butt-Head", "Xena: Warrior Princess", "JAG" and "Everybody Loves Raymond".

Meanwhile, gamers are playing titles such as "Duke Nukem 3D", "Crash Bandicoot", "Donkey Kong Country 3: Dixie Kong's Double Trouble!" and "Soul Blade". Children and teenagers are currently watching television shows such as "Bill Nye the Science Guy", "Boy Meets World", "Bruno the Kid" and "Pokemon". If you're a kid or a teenager, then you're probably playing with toys such as Yo-yo, G.I. Joe (figures), Fisher-Price Great Adventures Castle and the PlayStation (PS1).

These are trending news stories and fads that were prevalent at this time. These are topics that would have been in the media on June 21st, 1997.

News stories and other events that happened around June 21st, 1997.

Check out our personality summary for people who were born on June 21st, 1997.

If you are looking for some childhood nostalgia, then you should check out June 21st, 2003 instead.

Bill Clinton was the President of the United States on June 21st, 1997.

Tony Blair was the Prime Minister of the United Kingdom on June 21st, 1997.

Find out what your age was on June 21st, 1997, by entering your DOB below.
This information is not saved on our server.