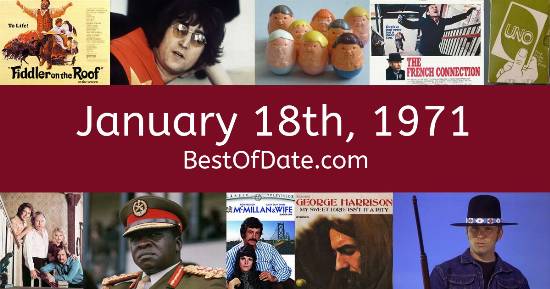 These songs were on top of the music charts in the United States and the United Kingdom on January 18th, 1971.

Thank you so much for making me feel complete way back on my birthdate history
Posted on January 21st, 2023 13:42

The date is January 18th, 1971, and it's a Monday. Anyone born today will have the star sign Capricorn. In America, the song My Sweet Lord by George Harrison is on top of the singles charts.

Over in the UK, Grandad by Clive Dunn is the number one hit song. Richard Nixon is currently the President of the United States, and the movie Love Story is at the top of the Box Office. In the United Kingdom, Edward Heath is the current Prime Minister.

On TV, people are watching popular shows such as "The Ed Sullivan Show", "Hawaii Five-O", "Marcus Welby, M.D." and "All in the Family". Kids and teenagers are watching TV shows such as "Lassie", "The Clangers", "Josie and the Pussycats" and "Groovie Goolies". If you're a kid or a teenager, then you're probably playing with toys such as Etch A Sketch, the Easy-Bake Oven, Twister mat and Clackers.

These are trending news stories and fads that were prevalent at this time. These are topics that would have been in the media on January 18th, 1971.

Check out our personality summary for people who were born on January 18th, 1971.

Television shows that people were watching in January, 1971.

If you are looking for some childhood nostalgia, then you should check out January 18th, 1977, instead.

Irish politician.
Born on January 18th, 1979
He was born exactly 8 years after this date.

Mass murderer. Deceased
Born on January 18th, 1984
He was born exactly 13 years after this date.

Richard Nixon was the President of the United States on January 18th, 1971.

Enter your date of birth below to find out how old you were on January 18th, 1971.
This information is not transmitted to our server.

Here are some fun statistics about January 18th, 1971.