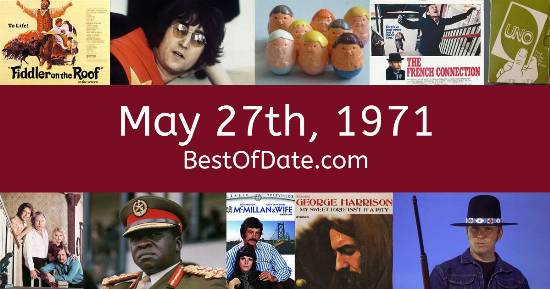 On May 27th, 1971, the following songs were at the top of the music charts in the USA and the UK.

The top "Box Office" movie on this date was the film "Sweet Sweetback's Baadasssss Song".

The date is May 27th, 1971, and it's a Thursday. Anyone born today will have the star sign Gemini. The summer of 1971 has finally arrived. The weather has warmed up and the evenings are brighter than usual.

In America, the song Joy To The World by Three Dog Night is on top of the singles charts. Over in the UK, Knock Three Times by Dawn is the number one hit song. Richard Nixon is currently the President of the United States, and the movie Sweet Sweetback's Baadasssss Song is at the top of the Box Office.

If you were to travel back to this day, notable figures such as Jim Morrison, Louis Armstrong, J. Edgar Hoover and Jackie Robinson would all be still alive. On TV, people are watching popular shows such as "The Ed Sullivan Show", "What's My Line?", "Gunsmoke" and "Hawaii Five-O". Children and teenagers are currently watching television shows such as "Underdog", "The Banana Splits", "Scooby-Doo, Where Are You!" and "The Clangers".

If you're a kid or a teenager, then you're probably playing with toys such as Troll doll, the Easy-Bake Oven, Motorific (slot car toys) and Frisbee.

These are trending news stories and fads that were prevalent at this time. These are topics that would have been in the media on May 27th, 1971.

News stories and other events that happened around May 27th, 1971.

Check out our personality summary for people who were born on May 27th, 1971.

Television shows that people were watching in May, 1971.

If you are looking for some childhood nostalgia, then you should check out May 27th, 1977 instead.

American rapper.
Born on May 27th, 1975
He was born exactly 4 years after this date.

American rapper.
Born on May 27th, 1975
He was born exactly 4 years after this date.

Richard Nixon was the President of the United States on May 27th, 1971.

Edward Heath was the Prime Minister of the United Kingdom on May 27th, 1971.

Find out what your age was on May 27th, 1971, by entering your DOB below.
This information is not saved on our server.