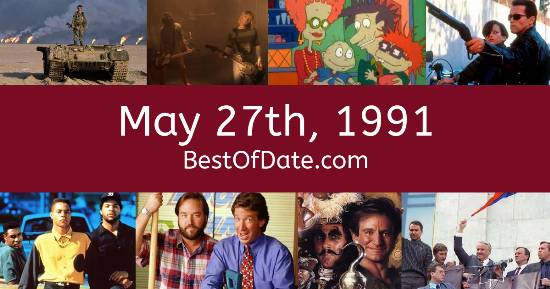 On May 27th, 1991, the following songs were at the top of the music charts in the USA and the UK.

The top "Box Office" movie on this date was the film "What About Bob?".

The date is May 27th, 1991, and it's a Monday. Anyone born today will have the star sign Gemini. The summer of 1991 has finally arrived. The weather has warmed up and the evenings are brighter than usual.

In America, the song I Dont Want To Cry by Mariah Carey is on top of the singles charts. Over in the UK, It's In His Kiss by Cher is the number one hit song. George W. Bush Snr. is currently the President of the United States, and the movie What About Bob? is at the top of the Box Office.

In India, former Prime Minister Rajiv Gandhi has been assassinated by a female suicide bomber. Meanwhile, 223 people have tragically lost their lives in Thailand after Lauda Air Boeing 767 crashes near Bangkok. If you were to travel back to this day, notable figures such as Miles Davis, Freddie Mercury, Robert Reed and Anthony Perkins would all be still alive.

On TV, people are watching popular shows such as "Cheers", "The Golden Girls", "Full House" and "Star Trek: The Next Generation". Meanwhile, gamers are playing titles such as "Paperboy", "DuckTales", "Wing Commander" and "The Simpsons: Bart vs. the Space Mutants". Children and teenagers are currently watching television shows such as "Danger Mouse", "The Cosby Show", "Growing Pains" and "Dink, the Little Dinosaur".

If you're a kid or a teenager, then you're probably playing with toys such as the Easy-Bake Oven, Transformers, the Sega Genesis / Mega Drive and the SEGA Game Gear.

These are trending news stories and fads that were prevalent at this time. These are topics that would have been in the media on May 27th, 1991.

News stories, pop culture trends, and other events that happened around May 27th, 1991.

Check out our personality summary for people who were born on May 27th, 1991.

Television shows that people were watching in May, 1991.

Popular video games that people were playing in May of 1991.

If you are looking for some childhood nostalgia, then you should check out May 27th, 1997, instead.

Celebrities, historical figures, and other notable people who were born on May 27th.

Historical weather information for May 27th, 1991.

Find out what your age was on May 27th, 1991, by entering your DOB below.
This information is not saved on our server.