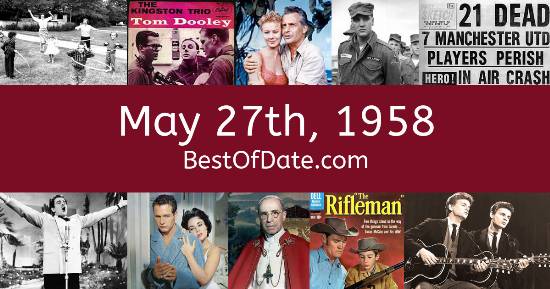 The best-selling single on May 27th, 1958 was "All I Have to Do Is Dream" by The Everly Brothers.

The date is May 27th, 1958 and it's a Tuesday. Anyone born today will have the star sign Gemini. The summer of 1958 has finally arrived. The weather has warmed up and the evenings are brighter than usual.

In music, the song "All I Have to Do Is Dream" by The Everly Brothers is the best-selling record at the moment. Dwight David Eisenhower is currently the President of the United States and Harold Macmillan is the Prime Minister of the United Kingdom. In fashion, women are sporting chemise dresses, sheaths, sack dresses and straight-cut suits. Short boxy jackets and shift dresses are also beginning to become popular. Meanwhile, a lot of men are sporting a "Teddy Boy" style that involves leather jackets, greased-back hair, extremely narrow trousers and velvet-collared jackets. Men are also wearing formal suits as daywear.

On TV, people are watching popular shows such as "The George Burns and Gracie Allen Show", "Tonight Starring Jack Paar", "Maverick" and "Casey Jones". Children and teenagers are currently watching television shows such as "Crusader Rabbit", "Tom Terrific", "Colonel Bleep" and "Leave It to Beaver". If you're a kid or a teenager, then you're probably playing with toys such as Tonka trucks, Toy Guns, Tiny Tears (doll) and Play-Doh.

Notable events that occurred around May 27th, 1958.

If you are looking for some childhood nostalgia, then check out May 27th, 1964 instead.

Dwight David Eisenhower was the President of the United States on May 27th, 1958.

Harold Macmillan was the Prime Minister of the United Kingdom on May 27th, 1958.