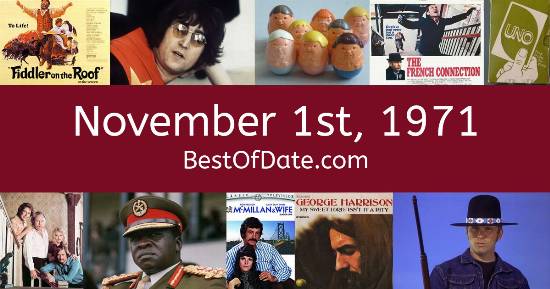 Songs that were on top of the music singles charts in the USA and the United Kingdom on November 1st, 1971.

The movie "The Organization" was at the top of the Box Office on November 1st, 1971.

The date is November 1st, 1971, and it's a Monday. Anyone born today will have the star sign Scorpio. Halloween has just come and passed.

It's November, so the evenings are getting darker and the days are getting colder. The song Maggie May / Reason To Believe by Rod Stewart is on top of the singles charts in both the USA and the United Kingdom. Richard Nixon is currently the President of the United States, and the movie The Organization is at the top of the Box Office.

If you were to travel back to this day, notable figures such as J. Edgar Hoover, Jackie Robinson, Janet Munro and Harry S. Truman would all be still alive. On TV, people are watching popular shows such as "McCloud", "The Sonny & Cher Comedy Hour", "The Persuaders!" and "Upstairs, Downstairs". Children and teenagers are currently watching television shows such as "Scooby-Doo, Where Are You!", "Groovie Goolies", "The Funky Phantom" and "The Electric Company".

If you're a kid or a teenager, then you're probably playing with toys such as Lite-Brite, Crissy (doll), Frisbee and Uno (card game).

These are trending news stories and fads that were prevalent at this time. These are topics that would have been in the media on November 1st, 1971.

News stories and other events that happened around November 1st, 1971.

Check out our personality summary for people who were born on November 1st, 1971.

Television shows that people were watching in November, 1971.

If you are looking for some childhood nostalgia, then you should check out November 1st, 1977 instead.

Television host / Model.
Born on November 1st, 1972
She was born exactly one year after this date.

English rapper.
Born on November 1st, 1985
He was born exactly 14 years after this date.

English DJ.
Born on November 1st, 1990
He was born exactly 19 years after this date.

Rapper. Deceased
Born on November 1st, 1996
He was born exactly 25 years after this date.

Richard Nixon was the President of the United States on November 1st, 1971.

Find out what your age was on November 1st, 1971, by entering your DOB below.
This information is not saved on our server.

Here are some fun statistics about November 1st, 1971.