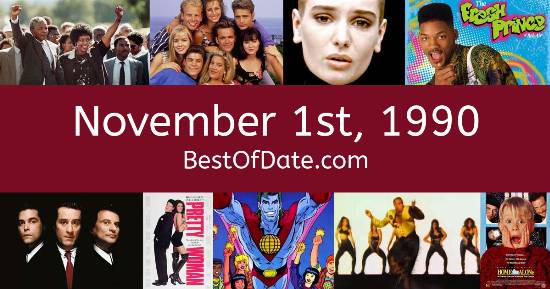 Songs that were on top of the music singles charts in the USA and the United Kingdom on November 1st, 1990.

The movie "Graveyard Shift" was at the top of the box office on November 1st, 1990.

The date is November 1st, 1990 and it's a Thursday. Anyone born today will have the star sign Scorpio. Halloween has just come and passed.

It's November, so the evenings are getting darker and the days are getting colder. In America, the song Ice Ice Baby by Vanilla Ice is on top of the singles charts. Over in the UK, Unchained Melody by Righteous Brothers is the number one hit song.

George W. Bush Snr. is currently the President of the United States and the movie Graveyard Shift is at the top of the Box Office. In the United Kingdom, Margaret Thatcher is the current Prime Minister. Texting is not a thing yet. Instead, people are using landline phones and pagers. Furthermore, the vast majority of people still have no idea what "the Internet" is.

A civil war has broken out in the African nation of Rwanda. In Europe, the Soviet Union is continuing to dissolve. In Irish politics, Tanaiste and presidential candidate Brian Lenihan has been dismissed from government by Taoiseach Charles Haughey amid allegations that he lied about asking President Patrick Hillery not to dissolve the Irish parliament in 1982.

If you were to travel back to this day, notable figures such as Roald Dahl, John Bardeen, Miles Davis and Freddie Mercury would all be still alive. On TV, people are watching popular shows such as "Dallas", "Magnum, P.I.", "The Golden Girls" and "Twin Peaks". Meanwhile, gamers are playing titles such as "Duck Hunt", "SimCity", "Castlevania III: Dracula's Curse" and "Phantasy Star II".

Kids and teenagers are watching TV shows such as "Full House", "Garfield and Friends", "Chip 'n' Dale's Rescue Rangers" and "Babar". If you're a kid or a teenager, then you're probably playing with toys such as Cabbage Patch Kids, Mr Frosty, Sylvanian Families and the Game Boy.

If you are looking for some childhood nostalgia, then check out November 1st, 1996 instead.

Rapper. Deceased
Born on November 1st, 1996
He was born exactly 6 years after this date.

George W. Bush Snr. was the President of the United States on November 1st, 1990.

Margaret Thatcher was the Prime Minister of the United Kingdom on November 1st, 1990.

Enter your date of birth below to find out how old you were on November 1st, 1990.

Here are some fun statistics about November 1st, 1990.

Have something to say about November 1st, 1990?