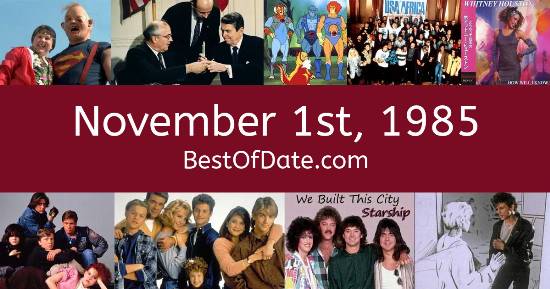 Songs that were on top of the music singles charts in the USA and the United Kingdom on November 1st, 1985.

The date is November 1st, 1985 and it's a Friday. Anyone born today will have the star sign Scorpio. Currently, people have "that Friday feeling" and are looking forward to the weekend.

Halloween has just come and passed. It's November, so the evenings are getting darker and the days are getting colder. In America, the song Parttime Lover by Stevie Wonder is on top of the singles charts.

Over in the UK, The Power Of Love by Jennifer Rush is the number one hit song. Ronald Reagan is currently the President of the United States and the movie Jagged Edge is at the top of the Box Office. In the United Kingdom, Margaret Thatcher is the current Prime Minister.

In fashion, women are currently wearing long sweaters, fishnet stockings, fingerless gloves, jumpsuits, over-sized scarves, miniskirts, stirrup pants and spandex cycling shorts. Meanwhile, men are wearing Hawaiian shirts, flannel, shell suits and wool sport coats. Because it's 1985, the radio stations are being dominated by the likes of Tears For Fears, USA For Africa, A-ha, Foreigner, Madonna, Wham! and Phil Collins. On TV, people are watching popular shows such as "The Smurfs", "The A-Team", "Sherlock Holmes" and "The Golden Girls".

Meanwhile, gamers are playing titles such as "Lunar Lander", "Pac-Man", "Star Wars: The Empire Strikes Back" and "Back to the Future". Kids and teenagers are watching TV shows such as "The Smurfs", "The Transformers", "The Cosby Show" and "Heathcliff & the Catillac Cats". If you're a kid or a teenager, then you're probably playing with toys such as the Easy-Bake Oven, Big wheel (tricycle), My Little Pony (figures) and Garbage Pail Kids (trading cards).

Ronald Reagan was the President of the United States on November 1st, 1985.

Margaret Thatcher was the Prime Minister of the United Kingdom on November 1st, 1985.

Enter your date of birth below to find out how old you were on November 1st, 1985.

Here are some fun statistics about November 1st, 1985.

Leave a comment and tell everyone why November 1st, 1985 is important to you.