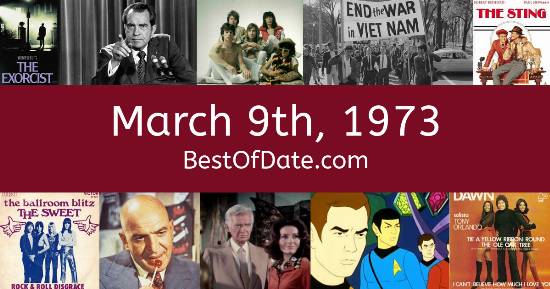 Songs that were on top of the music singles charts in the USA and the United Kingdom on March 9th, 1973.

The date is March 9th, 1973 and it's a Friday. Anyone born today will have the star sign Pisces. Currently, people have "that Friday feeling" and are looking forward to the weekend.

On TV, people are watching popular shows such as "What's My Line?", "Columbo.", "McCloud" and "Maude". Meanwhile, gamers are playing titles such as "Pong". Kids and teenagers are watching TV shows such as "Underdog", "JOT the Dot", "All in the Family" and "Fat Albert and the Cosby Kids".

Popular toys at the moment include the likes of Etch A Sketch, the Easy-Bake Oven, Lite-Brite and Uno (card game).

Richard Nixon was the President of the United States on March 9th, 1973.

Edward Heath was the Prime Minister of the United Kingdom on March 9th, 1973.

Enter your date of birth below to find out how old you were on March 9th, 1973.

Here are some fun statistics about March 9th, 1973.

Leave a comment and tell everyone why March 9th, 1973 is important to you.