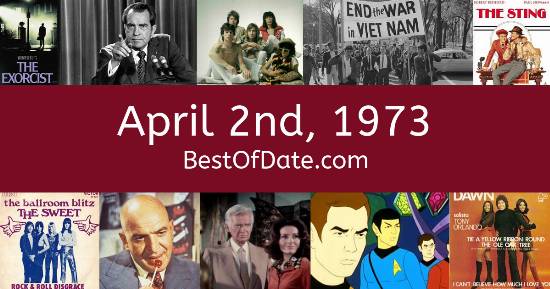 Songs that were on top of the music singles charts in the USA and the United Kingdom on April 2nd, 1973.

The date is April 2nd, 1973 and it's a Monday. Anyone born today will have the star sign Aries. The summer of 1973 is drawing closer and temperatures have started to rise.

In America, the song The Night The Lights Went Out In Georgia by Vicky Lawrence is on top of the singles charts. Over in the UK, Get Down by Gilbert O'Sullivan is the number one hit song. Richard Nixon is currently the President of the United States and the movie Five Fingers Of Death is at the top of the Box Office.

On TV, people are watching popular shows such as "Columbo.", "The Waltons", "M*A*S*H" and "Barnaby Jones". Meanwhile, gamers are playing titles such as "Pong". Kids and teenagers are watching TV shows such as "Mister Rogers' Neighborhood", "The Pink Panther Show", "All in the Family" and "The Adventures of Black Beauty".

If you're a kid or a teenager, then you're probably playing with toys such as Nerf Balls, VertiBird (toy helicopter), Weebles and Uno (card game).

If you are looking for some childhood nostalgia, then check out April 2nd, 1979 instead.

Richard Nixon was the President of the United States on April 2nd, 1973.

Edward Heath was the Prime Minister of the United Kingdom on April 2nd, 1973.

Enter your date of birth below to find out how old you were on April 2nd, 1973.

Here are some fun statistics about April 2nd, 1973.