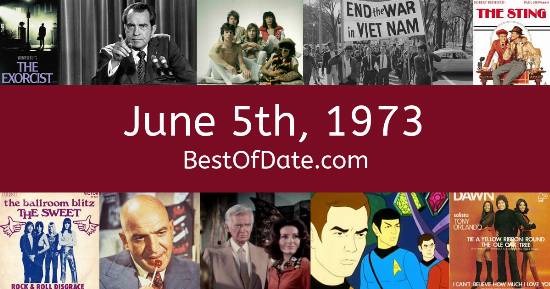 Songs that were on top of the music singles charts in the USA and the United Kingdom on June 5th, 1973.

The date is June 5th, 1973 and it's a Tuesday. Anyone born today will have the star sign Gemini. It's summer, so the temperatures are warmer and the evenings are longer than usual.

In America, the song My Love by Paul McCartney & Wings is on top of the singles charts. Over in the UK, See My Baby Jive by Wizzard is the number one hit song. Richard Nixon is currently the President of the United States and Edward Heath is the Prime Minister of the United Kingdom.

Meanwhile, gamers are playing titles such as "Pong". Children and teenagers are currently watching television shows such as "The Bugs Bunny Show", "JOT the Dot", "Mister Rogers' Neighborhood" and "Fat Albert and the Cosby Kids". Popular toys at the moment include the likes of Crissy (doll), G.I. Joe Adventure Team, VertiBird (toy helicopter) and Weebles.

Celebrities, historical figures and notable people who were born on the 5th of June.

Richard Nixon was the President of the United States on June 5th, 1973.

Edward Heath was the Prime Minister of the United Kingdom on June 5th, 1973.

Enter your date of birth below to find out how old you were on June 5th, 1973.

Here are some fun statistics about June 5th, 1973.

Leave a comment and tell everyone why June 5th, 1973 is important to you.