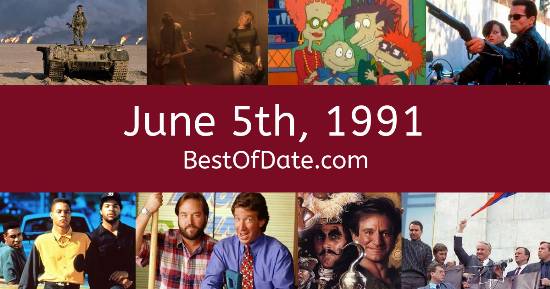 Songs that were on top of the music singles charts in the USA and the United Kingdom on June 5th, 1991.

The date is June 5th, 1991, and it's a Wednesday. Anyone born today will have the star sign Gemini. It's summer, so the temperatures are warmer and the evenings are longer than usual.

In America, the song More Than Words by Extreme is on top of the singles charts. Over in the UK, I Wanna Sex You Up by Color Me Badd is the number one hit song. George W. Bush Snr. is currently the President of the United States, and the movie Backdraft is at the top of the Box Office.

A new "alternative" rock band called The Smashing Pumpkins have released their debut album "Gish". In soccer, Serbian side Red Star Belgrade have won the European Cup after defeating French side Marseille on penalties. In celebrity news, actress Roseanne Barr Arnold and Tom Arnold have just been remarried.

In Japan, the eruption of Mount Unzen on the island of Kyushu has left 43 people dead. Meanwhile, in South Africa, the policy of apartheid has officially been ended. If you were to travel back to this day, notable figures such as Miles Davis, Freddie Mercury, Robert Reed and Anthony Perkins would all be still alive.

On TV, people are watching popular shows such as "Last of the Summer Wine", "Sherlock Holmes", "MacGyver" and "Quantum Leap". Meanwhile, gamers are playing titles such as "Duck Hunt", "Paperboy", "DuckTales" and "Castle of Illusion Starring Mickey Mouse". Children and teenagers are currently watching television shows such as "Roseanne", "Saved by the Bell", "The Simpsons" and "Round the Twist".

If you're a kid or a teenager, then you're probably playing with toys such as Cabbage Patch Kids, Jenga, Yo-yo and G.I. Joe (figures).

These are trending news stories and fads that were prevalent at this time. These are topics that would have been in the media on June 5th, 1991.

News stories and other events that happened around June 5th, 1991.

Check out our personality summary for people who were born on June 5th, 1991.

If you are looking for some childhood nostalgia, then you should check out June 5th, 1997 instead.

George W. Bush Snr. was the President of the United States on June 5th, 1991.

John Major was the Prime Minister of the United Kingdom on June 5th, 1991.

Find out what your age was on June 5th, 1991, by entering your DOB below.
This information is not saved on our server.

Here are some fun statistics about June 5th, 1991.