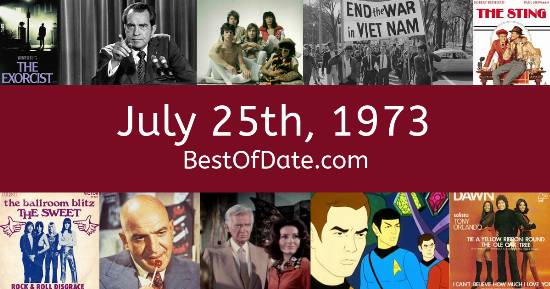 Songs that were on top of the music singles charts in the USA and the United Kingdom on July 25th, 1973.

The date is July 25th, 1973 and it's a Wednesday. Anyone born today will have the star sign Leo. It's summer, so the temperatures are warmer and the evenings are longer than usual.

In America, the song Bad Bad Leroy Brown by Jim Croce is on top of the singles charts. Over in the UK, I'm The Leader Of The Gang by Gary Glitter is the number one hit song. Richard Nixon is currently the President of the United States and the movie Live and Let Die is at the top of the Box Office.

On TV, people are watching popular shows such as "Columbo.", "McCloud", "The Flip Wilson Show" and "Emergency!". Meanwhile, gamers are playing titles such as "Pong" and "Space Race". Children and teenagers are currently watching television shows such as "Captain Kangaroo", "Underdog", "The Brady Bunch" and "Fat Albert and the Cosby Kids".

If you're a kid or a teenager, then you're probably playing with toys such as Battleship (game), Kenner SSP Racers, Magnavox Odyssey and Shrinky Dinks.

If you are looking for some childhood nostalgia, then check out July 25th, 1979 instead.

Brazilian soccer player.
Born on July 25th, 1986
He was born exactly 13 years after this date.

Richard Nixon was the President of the United States on July 25th, 1973.

Edward Heath was the Prime Minister of the United Kingdom on July 25th, 1973.