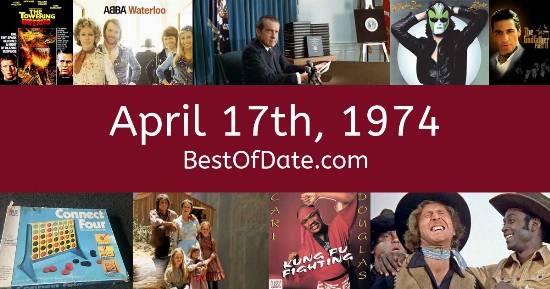 These songs were on top of the music charts in the United States and the United Kingdom on April 17th, 1974.

The movie "Blazing Saddles" was at the top of the Box Office on this day.

The following comments about April 17th, 1974 were written by our visitors.

The date is April 17th, 1974, and it's a Wednesday. Anyone born today will have the star sign Aries. The summer of 1974 is drawing closer and temperatures have started to rise.

In America, the song TSOP by MFSB is on top of the singles charts. Over in the UK, Seasons In The Sun by Terry Jacks is the number one hit song. Richard Nixon is currently the President of the United States, and the movie Blazing Saddles is at the top of the Box Office.

If you were to travel back to this day, notable figures such as Oskar Schindler and Eamon de Valera would be still alive. On TV, people are watching popular shows such as "Steptoe and Son", "The Two Ronnies", "Sanford and Son" and "The Bob Newhart Show". Meanwhile, gamers are playing titles such as "Pong", "Space Race" and "Gotcha".

Children and teenagers are currently watching television shows such as "Dastardly and Muttley in Their Flying Machines", "The Electric Company", "The Addams Family" and "Happy Days". If you're a kid or a teenager, then you're probably playing with toys such as Troll doll, Frisbee, Crissy (doll) and Risk board game.

These are trending news stories and fads that were prevalent at this time. These are topics that would have been in the media on April 17th, 1974.

News stories and other events that happened around April 17th, 1974.

Check out our personality summary for people who were born on April 17th, 1974.

Television shows that people were watching in April, 1974.

Popular video games that people were playing in April of 1974.

If you are looking for some childhood nostalgia, then you should check out April 17th, 1980 instead.

Love Island contestant.
Born on April 17th, 1997
He was born exactly 23 years after this date.

Richard Nixon was the President of the United States on April 17th, 1974.

Harold Wilson was the Prime Minister of the United Kingdom on April 17th, 1974.

Find out what your age was on April 17th, 1974, by entering your DOB below.
This information is not saved on our server.