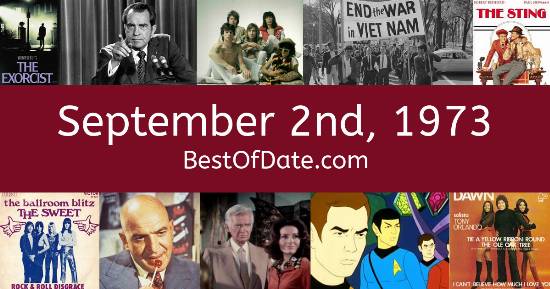 Songs that were on top of the music singles charts in the USA and the United Kingdom on September 2nd, 1973.

The movie "Enter the Dragon" was at the top of the Box Office on September 2nd, 1973.

The date is September 2nd, 1973, and it's a Sunday. Anyone born today will have the star sign Virgo. Currently, people are enjoying their weekend.

Schools and colleges are starting again and Autumn has officially arrived. As a result, temperatures are beginning to cool and trees are starting to shed their leaves. In the United States, it is Labor Day weekend. People are attending barbecues and other gatherings. To many Americans, Labor Day represents the end of summer 1973. In America, the song Brother Louie by Stories is on top of the singles charts.

Over in the UK, Young Love by Donny Osmond is the number one hit song. Richard Nixon is currently the President of the United States, and the movie Enter the Dragon is at the top of the Box Office. In the United Kingdom, Edward Heath is the current Prime Minister.

In fashion, the hippie look from the 1960s is still popular. Clothing items such as tie dye shirts, bell-bottoms, midi skirts, gauchos and Mexican blouses are being worn by women. Meanwhile, men are wearing dark satin shirts, ethnic-looking tunics, bell bottom jeans, tweed sports jackets and turtlenecks. It's 1973, so radio stations are playing songs from artists such as The Rolling Stones, Tony Orlando & Dawn, Sweet, Elton John, Roberta Flack, Carly Simon, Marvin Gaye and Jim Croce. If you were to travel back to this day, notable figures such as J. R. R. Tolkien, Gram Parsons and Oskar Schindler would all be still alive.

On TV, people are watching popular shows such as "The Mary Tyler Moore Show", "The Two Ronnies", "The Rookies" and "The Six Million Dollar Man". Meanwhile, gamers are playing titles such as "Pong" and "Space Race". Kids and teenagers are watching TV shows such as "Captain Kangaroo", "The Pink Panther Show", "Scooby-Doo, Where Are You!" and "Lassie's Rescue Rangers".

If you're a kid or a teenager, then you're probably playing with toys such as the Easy-Bake Oven, Battleship (game), Clackers and Uno (card game).

These are trending news stories and fads that were prevalent at this time. These are topics that would have been in the media on September 2nd, 1973.

Check out our personality summary for people who were born on September 2nd, 1973.

If you are looking for some childhood nostalgia, then you should check out September 2nd, 1979 instead.

Richard Nixon was the President of the United States on September 2nd, 1973.

Edward Heath was the Prime Minister of the United Kingdom on September 2nd, 1973.

Enter your date of birth below to find out how old you were on September 2nd, 1973.
This information is not transmitted to our server.

Here are some fun statistics about September 2nd, 1973.