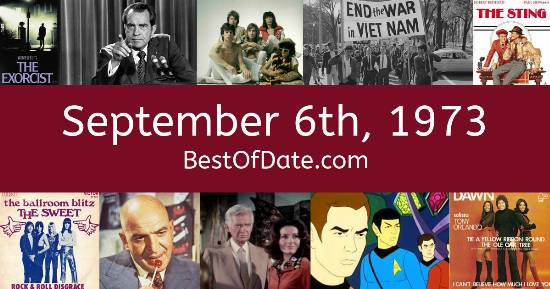 These songs were on top of the music charts in the United States and the United Kingdom on September 6th, 1973.

The movie "Enter the Dragon" was at the top of the Box Office on September 6th, 1973.

The date is September 6th, 1973, and it's a Thursday. Anyone born today will have the star sign Virgo. Schools and colleges are starting again and Autumn has officially arrived. As a result, temperatures are beginning to cool and trees are starting to shed their leaves.

In the United States, Labor Day of 1973 has recently come and passed. To many, this means that the summer is officially over. In America, the song Let's Get It On by Marvin Gaye is on top of the singles charts. Over in the UK, Young Love by Donny Osmond is the number one hit song.

Richard Nixon is currently the President of the United States, and the movie Enter the Dragon is at the top of the Box Office. In the United Kingdom, Edward Heath is the current Prime Minister. In fashion, the hippie look from the 1960s is still popular. Clothing items such as tie dye shirts, bell-bottoms, midi skirts, gauchos and Mexican blouses are being worn by women. Meanwhile, men are wearing dark satin shirts, ethnic-looking tunics, bell bottom jeans, tweed sports jackets and turtlenecks.

It's 1973, so radio stations are playing songs from artists such as The Rolling Stones, Tony Orlando & Dawn, Sweet, Elton John, Roberta Flack, Carly Simon, Marvin Gaye and Jim Croce. If you were to travel back to this day, notable figures such as Gram Parsons and Oskar Schindler would be still alive. On TV, people are watching popular shows such as "Medical Center", "McCloud", "Maude" and "Barnaby Jones".

Meanwhile, gamers are playing titles such as "Pong" and "Space Race". Kids and teenagers are watching TV shows such as "Mister Rogers' Neighborhood", "Scooby-Doo, Where Are You!", "The Amazing Chan and the Chan Clan" and "Schoolhouse Rock!". Popular toys at the moment include the likes of Operation, Lite-Brite, Uno (card game) and Big Jim (action figure).

These are trending news stories and fads that were prevalent at this time. These are topics that would have been in the media on September 6th, 1973.

Check out our personality summary for people who were born on September 6th, 1973.

If you are looking for some childhood nostalgia, then you should check out September 6th, 1979 instead.

Rapper.
Born on September 6th, 1978
She was born exactly 5 years after this date.

Singer.
Born on September 6th, 1980
She was born exactly 7 years after this date.

Rapper.
Born on September 6th, 1996
He was born exactly 23 years after this date.

Love Island contestant.
Born on September 6th, 1999
She was born exactly 26 years after this date.

Richard Nixon was the President of the United States on September 6th, 1973.

Edward Heath was the Prime Minister of the United Kingdom on September 6th, 1973.

Enter your date of birth below to find out how old you were on September 6th, 1973.
This information is not transmitted to our server.

Here are some fun statistics about September 6th, 1973.