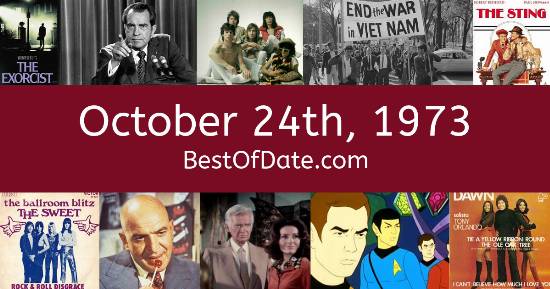 Songs that were on top of the music singles charts in the USA and the United Kingdom on October 24th, 1973:

The date is October 24th, 1973 and it's a Wednesday. Anyone born today will have the star sign Scorpio. The summer is long gone. Temperatures have started to become much cooler and the evenings are beginning to get darker.

Fallen leaves have carpeted driveways, lawns, pathways and sidewalks and there's a fresh earthy scent in the ear. Halloween of 1973 is quickly approaching. In America, the song Midnight Train To Georgia by Gladys Knight & Pips is on top of the singles charts.

Over in the UK, Daydreamer / Puppy Song by David Cassidy is the number one hit song. Richard Nixon is currently the President of the United States and Edward Heath is the Prime Minister of the United Kingdom. In fashion, the hippie look from the 1960s is still popular. Clothing items such as tie dye shirts, bell-bottoms, midi skirts, gauchos and Mexican blouses are being worn by women. Meanwhile, men are wearing dark satin shirts, ethnic-looking tunics, bell bottom jeans, tweed sports jackets and turtlenecks.

It's 1973, so radio stations are playing songs from artists such as The Rolling Stones, Tony Orlando & Dawn, Sweet, Elton John, Roberta Flack, Carly Simon, Marvin Gaye and Jim Croce. "The Way We Were", starring Barbra Streisand, is being shown in movie theaters at the moment. On TV, people are watching popular shows such as "What's My Line?", "McCloud", "M*A*S*H" and "Kojak".

Meanwhile, gamers are playing titles such as "Pong", "Space Race" and "Gotcha". Children and teenagers are currently watching television shows such as "JOT the Dot", "Mister Rogers' Neighborhood", "The Brady Bunch" and "Sesame Street". If you're a kid or a teenager, then you're probably playing with toys such as "Battleship (game)", "Clackers", "Nerf Balls" and "Kenner SSP Racers".

Who was the Prime Minister of the United Kingdom on October 24th, 1973?

Enter your date of birth below to find out how old you were on October 24th, 1973.

Looking for some nostalgia? Here are some Youtube videos relating to October 24th, 1973. Please note that videos are automatically selected by Youtube and that results may vary! Click on the "Load Next Video" button to view the next video in the search playlist. In many cases, you'll find episodes of old TV shows, documentaries, music videos and soap dramas.

Here are some fun statistics about October 24th, 1973.