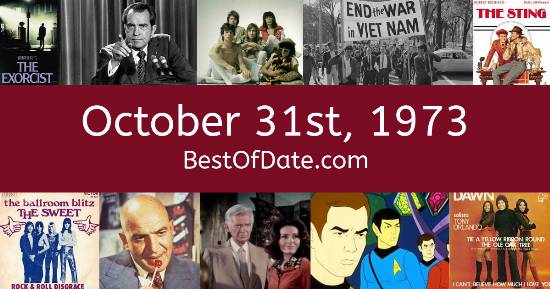 On October 31st, 1973, the following songs were at the top of the music charts in the USA and the UK.

The top "Box Office" movie on this date was the film "Billy Jack".

The date is October 31st, 1973, and it's a Wednesday. Anyone born today will have the star sign Scorpio. The summer is long gone. Temperatures have started to become much cooler and the evenings are beginning to get darker.

Fallen leaves have carpeted driveways, lawns, pathways and sidewalks and there's a fresh earthy scent in the ear. It's Halloween, so kids are trick-or-treating and horror movies are being shown on TV. In America, the song Midnight Train To Georgia by Gladys Knight & Pips is on top of the singles charts.

Over in the UK, Daydreamer / Puppy Song by David Cassidy is the number one hit song. Richard Nixon is currently the President of the United States, and the movie Billy Jack is at the top of the Box Office. In the United Kingdom, Edward Heath is the current Prime Minister.

If you were to travel back to this day, notable figures such as Oskar Schindler would be still alive. On TV, people are watching popular shows such as "What's My Line?", "Medical Center", "All in the Family" and "The Two Ronnies". Meanwhile, gamers are playing titles such as "Pong", "Space Race" and "Gotcha".

Children and teenagers are currently watching television shows such as "Captain Kangaroo", "The Banana Splits", "The Adventures of Black Beauty" and "Bailey's Comets". If you're a kid or a teenager, then you're probably playing with toys such as the Easy-Bake Oven, G.I. Joe Adventure Team, Nerf Balls and the Rock Flowers dolls.

These are trending news stories and fads that were prevalent at this time. These are topics that would have been in the media on October 31st, 1973.

News stories and other events that happened around October 31st, 1973.

Check out our personality summary for people who were born on October 31st, 1973.

If you are looking for some childhood nostalgia, then you should check out October 31st, 1979 instead.

Argentine soccer player. Deceased
Born on October 31st, 1990
He was born exactly 17 years after this date.

Soccer player.
Born on October 31st, 1997
He was born exactly 24 years after this date.

Richard Nixon was the President of the United States on October 31st, 1973.

Edward Heath was the Prime Minister of the United Kingdom on October 31st, 1973.

Find out what your age was on October 31st, 1973, by entering your DOB below.
This information is not saved on our server.

Here are some fun statistics about October 31st, 1973.