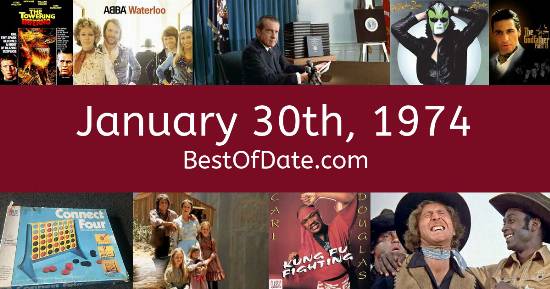 On January 30th, 1974, the following songs were at the top of the music charts in the USA and the UK.

The date is January 30th, 1974, and it's a Wednesday. Anyone born today will have the star sign Aquarius. In America, the song The Way We Were by Barbra Streisand is on top of the singles charts.

Popular toys at the moment include the likes of Etch A Sketch, G.I. Joe Adventure Team, Weebles and Risk board game.

These are trending news stories and fads that were prevalent at this time. These are topics that would have been in the media on January 30th, 1974.

Check out our personality summary for people who were born on January 30th, 1974.

If you are looking for some childhood nostalgia, then you should check out January 30th, 1980 instead.

Richard Nixon was the President of the United States on January 30th, 1974.

Enter your date of birth below to find out how old you were on January 30th, 1974.
This information is not transmitted to our server.

Here are some fun statistics about January 30th, 1974.