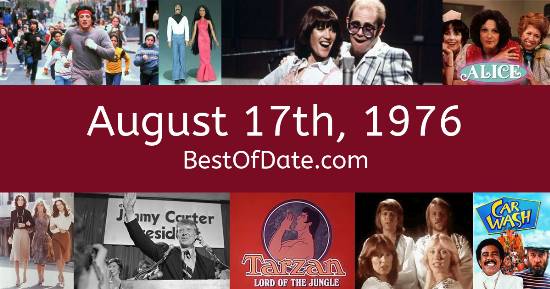 Songs that were on top of the music singles charts in the USA and the United Kingdom on August 17th, 1976.

The date is August 17th, 1976 and it's a Tuesday. Anyone born today will have the star sign Leo. It's summer, so the temperatures are warmer and the evenings are longer than usual.

The song Don't Go Breaking My Heart by Elton John & Kiki Dee is on top of the singles charts in both the USA and the United Kingdom. Gerald Ford is currently the President of the United States and the movie Silent Movie is at the top of the Box Office. In the United Kingdom, James Callaghan is the current Prime Minister.

If you were to travel back to this day, notable figures such as Anissa Jones, Tommy Bolin, Elvis Presley and Marc Bolan would all be still alive. On TV, people are watching popular shows such as "McCloud", "The Rockford Files", "Baretta" and "The Jeffersons". Meanwhile, gamers are playing titles such as "Tank", "Pursuit", "Gun Fight" and "Breakout".

Children and teenagers are currently watching television shows such as "Captain Kangaroo", "Mister Rogers' Neighborhood", "The Adventures of Black Beauty" and "Happy Days". Popular toys at the moment include the likes of Operation, VertiBird (toy helicopter), Kenner SSP Racers and Connect Four.

If you are looking for some childhood nostalgia, then check out August 17th, 1982 instead.

French soccer player.
Born on August 17th, 1977
He was born exactly one year after this date.

Australian singer.
Born on August 17th, 2003
He was born exactly 27 years after this date.

Gerald Ford was the President of the United States on August 17th, 1976.

James Callaghan was the Prime Minister of the United Kingdom on August 17th, 1976.

Enter your date of birth below to find out how old you were on August 17th, 1976.