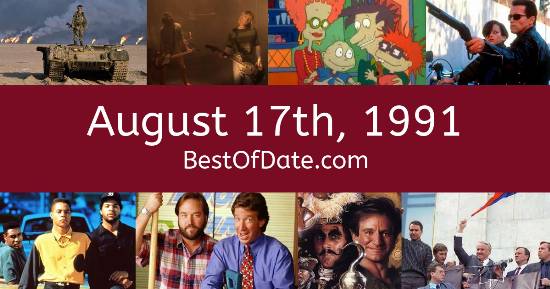 Songs that were on top of the music singles charts in the USA and the United Kingdom on August 17th, 1991.

The date is August 17th, 1991 and it's a Saturday. Anyone born today will have the star sign Leo. Currently, people are enjoying their weekend.

It's summer, so the temperatures are warmer and the evenings are longer than usual. The song (Everything I Do) I Do It For You by Bryan Adams is on top of the singles charts in both the USA and the United Kingdom. George W. Bush Snr. is currently the President of the United States and the movie Terminator 2 is at the top of the Box Office.

It's 1991, so the airwaves are being dominated by artists such as Bryan Adams, Michael Jackson, Roxette, R.E.M., Color Me Badd and Paula Abdul. In Europe, the Soviet Union is continuing to dissolve. A photograph of pregnant actress Demi Moore posing naked on the cover of Vanity Fair is currently receiving a lot of attention from the media.

A rock subgenre called "Grunge" is starting to rise in popularity. A new cartoon series called "Rugrats" has just been aired on Nickelodeon for the first time. Meanwhile, another cartoon called "The Ren & Stimpy Show" has also been broadcast on the network for the first time. Heavy metal band Metallica have just released their self-titled album "Metallica".

On TV, people are watching popular shows such as "Teenage Mutant Ninja Turtles", "The Wonder Years", "Quantum Leap" and "Beverly Hills, 90210". Meanwhile, gamers are playing titles such as "Duck Hunt", "Golden Axe", "Castle of Illusion Starring Mickey Mouse" and "Battletoads". Children and teenagers are currently watching television shows such as "The Wonder Years", "Roseanne", "Beverly Hills, 90210" and "Are You Afraid of the Dark?".

Popular toys at the moment include the likes of Sylvanian Families, the Sega Genesis / Mega Drive, Yo-yo and G.I. Joe (figures).

If you are looking for some childhood nostalgia, then check out August 17th, 1997 instead.

George W. Bush Snr. was the President of the United States on August 17th, 1991.

John Major was the Prime Minister of the United Kingdom on August 17th, 1991.

Enter your date of birth below to find out how old you were on August 17th, 1991.