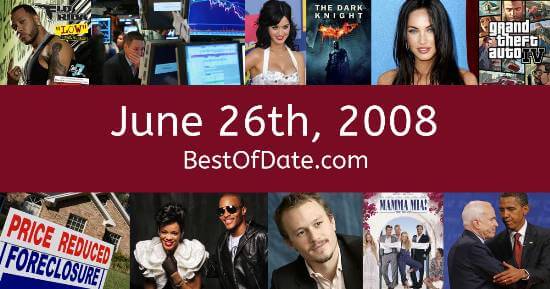 Songs that were on top of the music singles charts in the USA and the United Kingdom on June 26th, 2008.

The date is June 26th, 2008 and it's a Thursday. Anyone born today will have the star sign Cancer. It's summer, so the temperatures are warmer and the evenings are longer than usual.

Kids and teenagers are watching TV shows such as "Dora the Explorer", "LazyTown", "Everybody Hates Chris" and "Wizards of Waverly Place". Popular toys at the moment include the likes of the Xbox 360, the PlayStation 3 and iPod Touch.

If you are looking for some childhood nostalgia, then check out June 26th, 2014 instead.

Gordon Brown was the Prime Minister of the United Kingdom on June 26th, 2008.