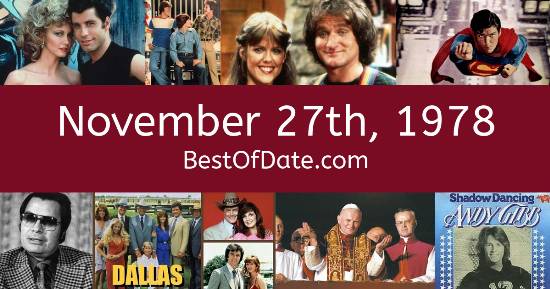 Songs that were on top of the music singles charts in the USA and the United Kingdom on November 27th, 1978.

The date is November 27th, 1978 and it's a Monday. Anyone born today will have the star sign Sagittarius. In America, Thanksgiven Day has come and passed.

It's November, so the evenings are getting darker and the days are getting colder. In America, the song You Don't Bring Me Flowers by Barbra Streisand & Neil Diamond is on top of the singles charts. Over in the UK, Da Ya Think I'm Sexy by Rod Stewart is the number one hit song.

If you're a kid or a teenager, then you're probably playing with toys such as Lite-Brite, Baby Alive (doll), the Atari 2600 and Shogun Warriors.

Jimmy Carter was the President of the United States on November 27th, 1978.

James Callaghan was the Prime Minister of the United Kingdom on November 27th, 1978.

Enter your date of birth below to find out how old you were on November 27th, 1978.

Here are some fun statistics about November 27th, 1978.