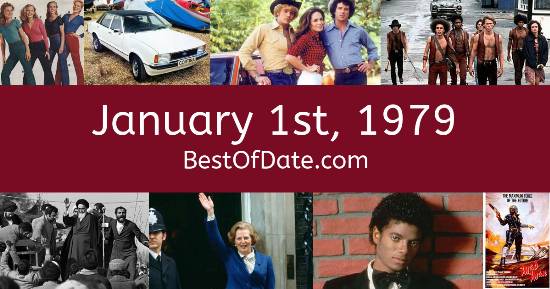 Songs that were on top of the music singles charts in the USA and the United Kingdom on January 1st, 1979.

The date is January 1st, 1979 and it's a Monday. Anyone born today will have the star sign Capricorn. It's New Years Day, the official start of the year 1979. A lot of people are relaxing at home. Others are nursing hangovers from the night before.

In America, the song Too Much Heaven by The Bee Gees is on top of the singles charts. Over in the UK, YMCA by Village People is the number one hit song. Jimmy Carter is currently the President of the United States and the movie Superman is at the top of the Box Office.

If you were to travel back to this day, notable figures such as Sid Vicious, John Wayne, Alfred Hitchcock and Ian Curtis would all be still alive. On TV, people are watching popular shows such as "Barnaby Jones", "Little House on the Prairie", "Charlie's Angels" and "WKRP in Cincinnati". Meanwhile, gamers are playing titles such as "Pursuit", "Gun Fight", "Breakout" and "Space Invaders".

Children and teenagers are currently watching television shows such as "Captain Kangaroo", "Mister Rogers' Neighborhood", "Godzilla" and "Diff'rent Strokes". Popular toys at the moment include the likes of Operation, Risk board game, Magna Doodle and Connect Four.

If you are looking for some childhood nostalgia, then check out January 1st, 1985 instead.

Jimmy Carter was the President of the United States on January 1st, 1979.

James Callaghan was the Prime Minister of the United Kingdom on January 1st, 1979.

Enter your date of birth below to find out how old you were on January 1st, 1979.

Here are some fun statistics about January 1st, 1979.