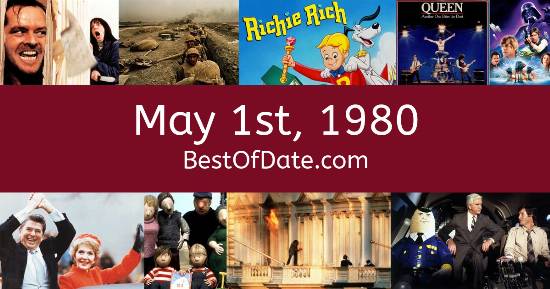 Songs that were on top of the music singles charts in the USA and the United Kingdom on May 1st, 1980.

The date is May 1st, 1980 and it's a Thursday. Anyone born today will have the star sign Taurus. The summer of 1980 has finally arrived. The weather has warmed up and the evenings are brighter than usual.

In America, the song Call Me by Blondie is on top of the singles charts. Over in the UK, Geno by Dexy's Midnight Runners is the number one hit song. Jimmy Carter is currently the President of the United States and the movie Kramer vs. Kramer is at the top of the Box Office.

On TV, people are watching popular shows such as "Last of the Summer Wine", "Quincy, M.E.", "Chips" and "Hart to Hart". Meanwhile, gamers are playing titles such as "Breakout", "Space Invaders", "Lunar Lander" and "Asteroids". Children and teenagers are currently watching television shows such as "Captain Kangaroo", "The Bugs Bunny Show", "Sesame Street" and "Battle of the Planets".

If you're a kid or a teenager, then you're probably playing with toys such as VertiBird (toy helicopter), Lego Technic, the Atari 2600 and Cabbage Patch Kids.

Notable events that occurred around May 1st, 1980.

If you are looking for some childhood nostalgia, then check out May 1st, 1986 instead.

Social media personality.
Born on May 1st, 2004
She was born exactly 24 years after this date.

Jimmy Carter was the President of the United States on May 1st, 1980.

Margaret Thatcher was the Prime Minister of the United Kingdom on May 1st, 1980.

Enter your date of birth below to find out how old you were on May 1st, 1980.