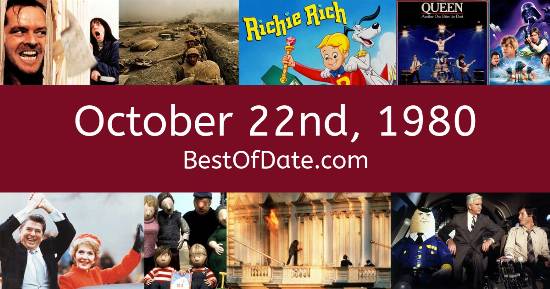 Songs that were on top of the music singles charts in the USA and the United Kingdom on October 22nd, 1980.

The date is October 22nd, 1980 and it's a Wednesday. Anyone born today will have the star sign Libra. The summer is long gone. Temperatures have started to become much cooler and the evenings are beginning to get darker.

Fallen leaves have carpeted driveways, lawns, pathways and sidewalks and there's a fresh earthy scent in the ear. Halloween of 1980 is quickly approaching and stores are selling costumes and decorations. The song Woman In Love by Barbra Streisand is on top of the singles charts in both the USA and the United Kingdom.

On TV, people are watching popular shows such as "M*A*S*H", "Little House on the Prairie", "Eight Is Enough" and "Knots Landing". Meanwhile, gamers are playing titles such as "Breakout", "Space Invaders", "Pac-Man" and "Missile Command". Children and teenagers are currently watching television shows such as "The Bugs Bunny Show", "Mister Rogers' Neighborhood", "Diff'rent Strokes" and "Thundarr the Barbarian".

If you are looking for some childhood nostalgia, then check out October 22nd, 1986 instead.

Celebrities, historical figures and notable people who were born on the 22nd of October.

Jimmy Carter was the President of the United States on October 22nd, 1980.

Margaret Thatcher was the Prime Minister of the United Kingdom on October 22nd, 1980.

Enter your date of birth below to find out how old you were on October 22nd, 1980.

Here are some fun statistics about October 22nd, 1980.