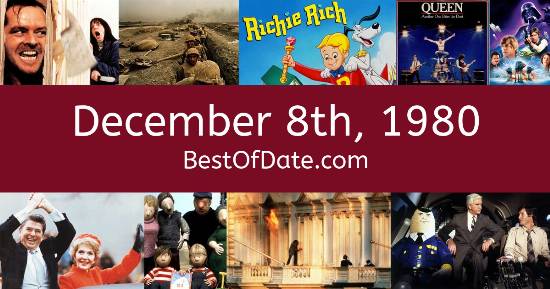 These songs were on top of the music charts in the United States and the United Kingdom on December 8th, 1980.

The movie "Private Benjamin" was at the top of the Box Office on December 8th, 1980.

The date is December 8th, 1980, and it's a Monday. Anyone born today will have the star sign Sagittarius. The Christmas season of 1980 has began.

In America, the song Lady by Kenny Rogers is on top of the singles charts. Over in the UK, Super Trouper by ABBA is the number one hit song. Jimmy Carter is currently the President of the United States, and the movie Private Benjamin is at the top of the Box Office.

If you were to travel back to this day, notable figures such as John Lennon, Bob Marley, Bill Shankly and William Holden would all be still alive. On TV, people are watching popular shows such as "The Waltons", "Happy Days", "Laverne & Shirley" and "Three's Company". Meanwhile, gamers are playing titles such as "Breakout", "Space Invaders", "Lunar Lander" and "Pac-Man".

Children and teenagers are currently watching television shows such as "Captain Kangaroo", "Sesame Street", "The All New Popeye Hour" and "Cockleshell Bay". If you're a kid or a teenager, then you're probably playing with toys such as the Easy-Bake Oven, VertiBird (toy helicopter), Magna Doodle and Space Lego.

These are trending news stories and fads that were prevalent at this time. These are topics that would have been in the media on December 8th, 1980.

Check out our personality summary for people who were born on December 8th, 1980.

If you are looking for some childhood nostalgia, then you should check out December 8th, 1986 instead.

Rapper.
Born on December 8th, 1982
She was born exactly 2 years after this date.

Soccer player.
Born on December 8th, 1994
He was born exactly 14 years after this date.

Soccer player.
Born on December 8th, 1999
He was born exactly 19 years after this date.

Jimmy Carter was the President of the United States on December 8th, 1980.

Margaret Thatcher was the Prime Minister of the United Kingdom on December 8th, 1980.

Enter your date of birth below to find out how old you were on December 8th, 1980.
This information is not transmitted to our server.

Here are some fun statistics about December 8th, 1980.