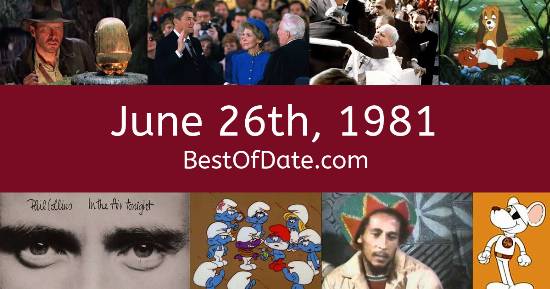 Songs that were on top of the music singles charts in the USA and the United Kingdom on June 26th, 1981.

The date is June 26th, 1981 and it's a Friday. Anyone born today will have the star sign Cancer. Currently, people have "that Friday feeling" and are looking forward to the weekend.

It's summer, so the temperatures are warmer and the evenings are longer than usual. In America, the song Bette Davis Eyes by Kim Carnes is on top of the singles charts. Over in the UK, One Day In Your Life by Michael Jackson is the number one hit song.

Meanwhile, gamers are playing titles such as "Lunar Lander", "Asteroids", "Galaxian" and "Pac-Man". Kids and teenagers are watching TV shows such as "Fat Albert and the Cosby Kids", "Happy Days", "Mork & Mindy" and "Thundarr the Barbarian". If you're a kid or a teenager, then you're probably playing with toys such as the Atari 2600, Simon (memory game), Big wheel (tricycle) and Monchhichi / Chicaboo.

Ronald Reagan was the President of the United States on June 26th, 1981.

Margaret Thatcher was the Prime Minister of the United Kingdom on June 26th, 1981.

Leave a comment and tell everyone why June 26th, 1981 is important to you.