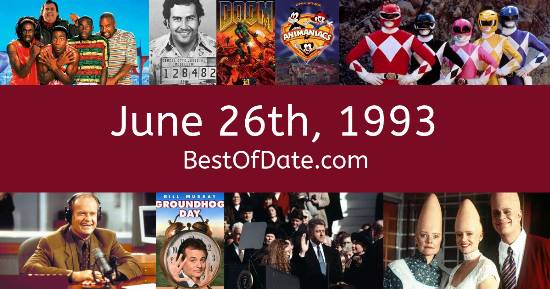 On June 26th, 1993, the following songs were at the top of the music charts in the USA and the UK.

The top "Box Office" movie on this date was the film "Jurassic Park".

The date is June 26th, 1993, and it's a Saturday. Anyone born today will have the star sign Cancer. Currently, people are enjoying their weekend.

It's summer, so the temperatures are warmer and the evenings are longer than usual. In America, the song That's The Way Love Goes by Janet Jackson is on top of the singles charts. Over in the UK, Can't Help Falling In Love by UB40 is the number one hit song.

Bill Clinton is currently the President of the United States, and the movie Jurassic Park is at the top of the Box Office. In the United Kingdom, John Major is the current Prime Minister. Texting is not a thing yet. Instead, people are using landline phones and pagers. Furthermore, the vast majority of people still have no idea what "the Internet" is.

In celebrity news, Prince has recently announced that he is changing his name to a symbol. As a result, the media is now referring to him as "the Artist Formerly Known as Prince". In basketball, the Chicago Bulls have won the 1993 NBA Finals after defeating the Phoenix Suns 4-2. This is Chicago's third consecutive championship title - a feat that hasn't been seen since the 1960s. In Ireland, the country's sodomy law has been reformed to decriminalize homosexuality.

The films "Sleepless in Seattle" and "Dennis the Menace" have recently been released in movie theaters. In Canada, Kim Campbell has become the country's first ever female Prime Minister. If you were to travel back to this day, notable figures such as Reggie Lewis, Vincent Price, River Phoenix and Frank Zappa would all be still alive.

On TV, people are watching popular shows such as "Matlock", "Roseanne", "One Foot in the Grave" and "Star Trek: Deep Space Nine". Meanwhile, gamers are playing titles such as "The Legend of Zelda: A Link to the Past", "Ecco the Dolphin", "Super Mario Kart" and "Star Fox". Children and teenagers are currently watching television shows such as "The Fresh Prince of Bel-Air", "Barney & Friends", "The Addams Family" and "Hangin' with Mr. Cooper".

Popular toys at the moment include the likes of the Easy-Bake Oven, the SEGA Game Gear, Teen Talk Barbie and Mighty Max.

These are trending news stories and fads that were prevalent at this time. These are topics that would have been in the media on June 26th, 1993.

Check out our personality summary for people who were born on June 26th, 1993.

Television shows that people were watching in June, 1993.

Popular video games that people were playing in June of 1993.

If you are looking for some childhood nostalgia, then you should check out June 26th, 1999 instead.

Bill Clinton was the President of the United States on June 26th, 1993.

John Major was the Prime Minister of the United Kingdom on June 26th, 1993.

Enter your date of birth below to find out how old you were on June 26th, 1993.
This information is not transmitted to our server.