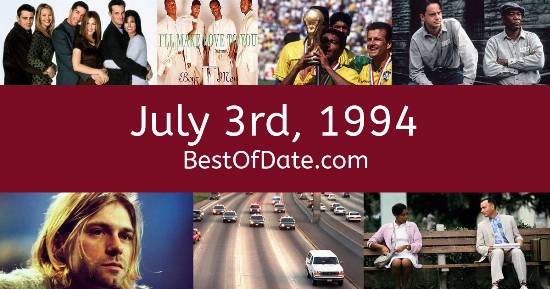 Songs that were on top of the music singles charts in the USA and the United Kingdom on July 3rd, 1994.

The date is July 3rd, 1994 and it's a Sunday. Anyone born today will have the star sign Cancer. Currently, people are enjoying their weekend.

In America, the July 4th celebrations are fast approaching. It's summer, so the temperatures are warmer and the evenings are longer than usual. In America, the song I Swear by All-4-One is on top of the singles charts.

Over in the UK, Love Is All Around by Wet Wet Wet is the number one hit song. Bill Clinton is currently the President of the United States and the movie Lion King is at the top of the Box Office. In the United Kingdom, John Major is the current Prime Minister.

On the continent of Africa, a horrible event is unfolding, as the Hutu majority in Rwanda attempt to wipe out the Tutsi minority. This genocide began following the assassination of President Juvenal Habyarimana. In the United States, the 1994 FIFA World Cup is being held. In Japan, 8 people have lost their lives following a sarin gas attack by the Aum Shinrikyo doomsday cult. The attack took place in a quiet neighborhood in Matsumoto, Nagano.

American figure skater Tonya Harding has recently been banned for life from the sport. The ban has come as a result of her involvement in an attack on rival skater Nancy Kerrigan back in January. In a tragic turn of events, Colombian defender Andrés Escobar has been shot dead in Medellín. Escobar's murder is believed to be revenge for the own goal that he scored against the United States in the 1994 FIFA World Cup. In celebrity news, actor Liam Neeson and actress Natasha Richardson have been married in New York.

If you were to travel back to this day, notable figures such as Raul Julia, Eazy E, Selena and Bob Ross would all be still alive. On TV, people are watching popular shows such as "Last of the Summer Wine", "Seinfeld", "One Foot in the Grave" and "Beavis and Butt-Head". Meanwhile, gamers are playing titles such as "Mortal Kombat", "Gunstar Heroes", "Myst" and "RoboCop Versus The Terminator".

Children and teenagers are currently watching television shows such as "Mister Rogers' Neighborhood", "Biker Mice from Mars", "Boy Meets World" and "All That". If you're a kid or a teenager, then you're probably playing with toys such as Cabbage Patch Kids, the Game Boy, Lego Pirates and the Super Nintendo Entertainment System (SNES).

If you are looking for some childhood nostalgia, then check out July 3rd, 2000 instead.

Bill Clinton was the President of the United States on July 3rd, 1994.

John Major was the Prime Minister of the United Kingdom on July 3rd, 1994.

Enter your date of birth below to find out how old you were on July 3rd, 1994.

Here are some fun statistics about July 3rd, 1994.