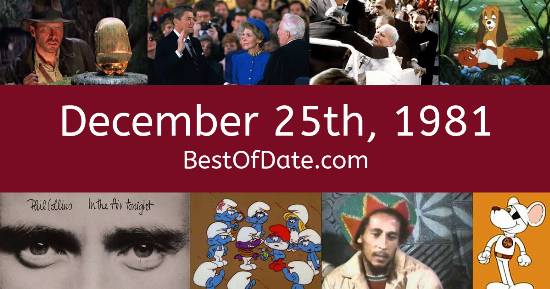 December 25th, 1981 relates to a fictional event in a movie, book, game or television series.

Songs that were on top of the music singles charts in the USA and the United Kingdom on December 25th, 1981.

The date is December 25th, 1981 and it's a Friday. Anyone born today will have the star sign Capricorn. Currently, people have "that Friday feeling" and are looking forward to the weekend.

It's Christmas Day of 1981, so most people are exchanging presents and spending time at home with their families. In America, the song Physical by Olivia Newton-John is on top of the singles charts. Over in the UK, Don't You Want Me by Human League is the number one hit song.

On TV, people are watching popular shows such as "Laverne & Shirley", "The Love Boat", "The Dukes of Hazzard" and "Hart to Hart". Meanwhile, gamers are playing titles such as "Breakout", "Space Invaders", "Pac-Man" and "Missile Command". Children and teenagers are currently watching television shows such as "Captain Kangaroo", "Mister Rogers' Neighborhood", "Sesame Street" and "Happy Days".

Popular toys at the moment include the likes of the Easy-Bake Oven, VertiBird (toy helicopter), Intellivision (games console) and Fisher-Price Little People (Farm).

Celebrities, historical figures and notable people who were born on the 25th of December.

Ronald Reagan was the President of the United States on December 25th, 1981.

Margaret Thatcher was the Prime Minister of the United Kingdom on December 25th, 1981.

Enter your date of birth below to find out how old you were on December 25th, 1981.

Here are some fun statistics about December 25th, 1981.

Leave a comment and tell everyone why December 25th, 1981 is important to you.