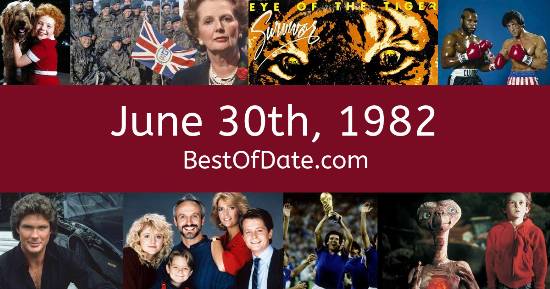 Songs that were on top of the music singles charts in the USA and the United Kingdom on June 30th, 1982.

The date is June 30th, 1982 and it's a Wednesday. Anyone born today will have the star sign Cancer. It's summer, so the temperatures are warmer and the evenings are longer than usual.

In America, the song Ebony And Ivory by Paul McCartney & Stevie Wonder is on top of the singles charts. Over in the UK, I've Never Been To Me by Charlotte is the number one hit song. Ronald Reagan is currently the President of the United States and the movie E.T. is at the top of the Box Office.

In Spain, the 1982 FIFA World Cup is currently taking place. On TV, people are watching popular shows such as "Last of the Summer Wine", "Three's Company", "Trapper John, M.D." and "Spider-Man and His Amazing Friends". Meanwhile, gamers are playing titles such as "Space Invaders", "Lunar Lander", "Asteroids" and "Galaxian".

Children and teenagers are currently watching television shows such as "The Bugs Bunny Show", "Sesame Street", "Cockleshell Bay" and "Danger Mouse". If you're a kid or a teenager, then you're probably playing with toys such as Hungry Hungry Hippos, Snoopy Sno-Cone Machine, Rubik's Cube and Masters of the Universe (figures).

Ronald Reagan was the President of the United States on June 30th, 1982.

Margaret Thatcher was the Prime Minister of the United Kingdom on June 30th, 1982.

Leave a comment and tell everyone why June 30th, 1982 is important to you.