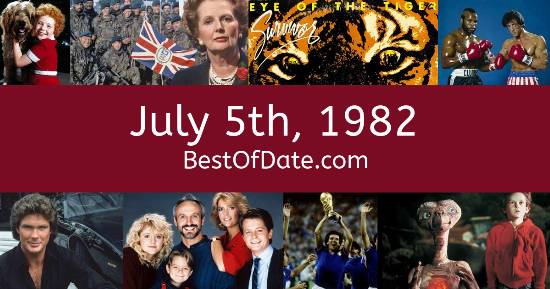 Songs that were on top of the music singles charts in the USA and the United Kingdom on July 5th, 1982.

The date is July 5th, 1982 and it's a Monday. Anyone born today will have the star sign Cancer. The 4th of July celebrations in America have come and passed.

It's summer, so the temperatures are warmer and the evenings are longer than usual. In America, the song Don't You Want Me by Human League is on top of the singles charts. Over in the UK, Happy Talk by Captain Sensible is the number one hit song.

On TV, people are watching popular shows such as "Chips", "Hart to Hart", "Trapper John, M.D." and "Archie Bunker's Place". Meanwhile, gamers are playing titles such as "Lunar Lander", "Pac-Man", "Missile Command" and "Donkey Kong". Kids and teenagers are watching TV shows such as "Captain Kangaroo", "Sesame Street", "Diff'rent Strokes" and "The Smurfs".

If you're a kid or a teenager, then you're probably playing with toys such as the Atari 2600, Water Ring Toss, Cabbage Patch Kids and the Lego train set.

If you are looking for some childhood nostalgia, then check out July 5th, 1988 instead.

Ronald Reagan was the President of the United States on July 5th, 1982.

Margaret Thatcher was the Prime Minister of the United Kingdom on July 5th, 1982.

Enter your date of birth below to find out how old you were on July 5th, 1982.

Here are some fun statistics about July 5th, 1982.