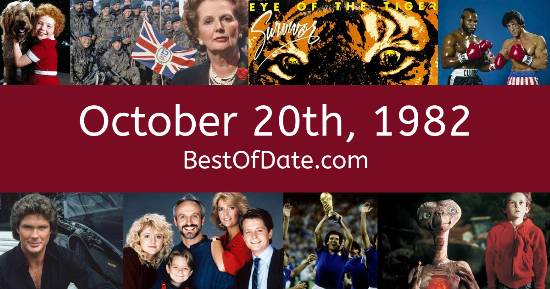 Songs that were on top of the music singles charts in the USA and the United Kingdom on October 20th, 1982.

The date is October 20th, 1982 and it's a Wednesday. Anyone born today will have the star sign Libra. The summer is long gone. Temperatures have started to become much cooler and the evenings are beginning to get darker.

Fallen leaves have carpeted driveways, lawns, pathways and sidewalks and there's a fresh earthy scent in the ear. Halloween of 1982 is quickly approaching and stores are selling costumes and decorations. In America, the song Jack And Diane by John Cougar is on top of the singles charts.

Over in the UK, Pass The Dutchie by Musical Youth is the number one hit song. Ronald Reagan is currently the President of the United States and the movie E.T. is at the top of the Box Office. In the United Kingdom, Margaret Thatcher is the current Prime Minister.

On TV, people are watching popular shows such as "The Jeffersons", "Dallas", "Trapper John, M.D." and "Spider-Man and His Amazing Friends". Meanwhile, gamers are playing titles such as "Space Invaders", "Lunar Lander", "Galaxian" and "Missile Command". Kids and teenagers are watching TV shows such as "Captain Kangaroo", "The Bugs Bunny Show", "Mister Rogers' Neighborhood" and "The Smurfs".

Popular toys at the moment include the likes of Hungry Hungry Hippos, Snoopy Sno-Cone Machine, Masters of the Universe (figures) and the Commodore 64.

If you are looking for some childhood nostalgia, then check out October 20th, 1988 instead.

Ronald Reagan was the President of the United States on October 20th, 1982.

Margaret Thatcher was the Prime Minister of the United Kingdom on October 20th, 1982.

Enter your date of birth below to find out how old you were on October 20th, 1982.

Here are some fun statistics about October 20th, 1982.