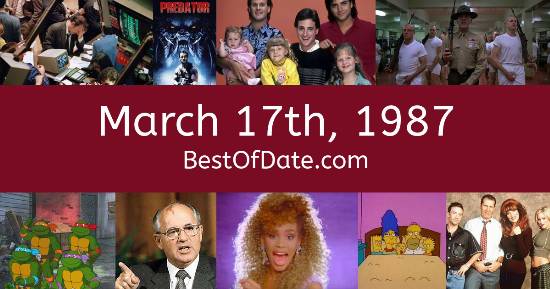 Songs that were on top of the music singles charts in the USA and the United Kingdom on March 17th, 1987.

The date is March 17th, 1987 and it's a Tuesday. Anyone born today will have the star sign Pisces. Spring has arrived and the days have become longer.

It's St. Patrick's Day, which means that a sizeable amount of people are spending their day in bars. Parades are being held in major cities throughout the world. In America, the song Lean On Me by Club Nouveau is on top of the singles charts. Over in the UK, Everything I Own by Boy George is the number one hit song.

Because it's 1987, the radio stations are being dominated by the likes of Los Lobos, Rick Astley, Whitney Houston, the Pet Shop Boys, Bon Jovi, U2 and Madonna. If you were to travel back to this day, notable figures such as Fred Astaire, Lee Marvin, James Baldwin and Heather O'Rourke would all be still alive. On TV, people are watching popular shows such as "Knots Landing", "Miami Vice", "ThunderCats" and "The Equalizer".

Meanwhile, gamers are playing titles such as "Missile Command", "Mario Bros.", "Duck Hunt" and "Ultima IV: Quest of the Avatar". Kids and teenagers are watching TV shows such as "Danger Mouse", "Muppet Babies", "Thomas the Tank Engine" and "Pingu". If you're a kid or a teenager, then you're probably playing with toys such as Speak & Spell, My Little Pony (figures), Pogo ball / Lolo ball and Garbage Pail Kids (trading cards).

If you are looking for some childhood nostalgia, then check out March 17th, 1993 instead.

Ronald Reagan was the President of the United States on March 17th, 1987.

Margaret Thatcher was the Prime Minister of the United Kingdom on March 17th, 1987.

Enter your date of birth below to find out how old you were on March 17th, 1987.