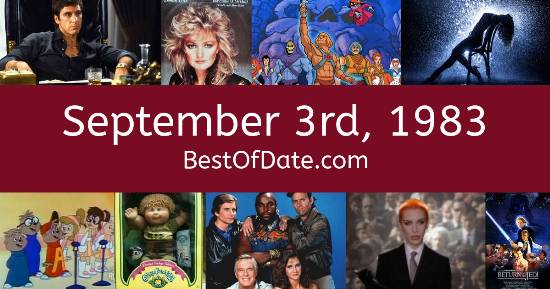 Songs that were on top of the music singles charts in the USA and the United Kingdom on September 3rd, 1983.

The date is September 3rd, 1983 and it's a Saturday. Anyone born today will have the star sign Virgo. Currently, people are enjoying their weekend.

Schools have started back and autumn has arrived, so temperatures have started to cool and trees are beginning to shed their leaves. In America, the song Every Breath You Take by Police is on top of the singles charts. Over in the UK, Give It Up by KC & Sunshine Band is the number one hit song.

Because it's 1983, the radio stations are being dominated by artists such as Culture Club, Michael Jackson, Irene Cara, David Bowie and The Police. On TV, people are watching popular shows such as "Three's Company", "The Love Boat", "Only Fools and Horses" and "The Smurfs". Meanwhile, gamers are playing titles such as "Space Invaders", "Lunar Lander", "Galaxian" and "Pac-Man".

Children and teenagers are currently watching television shows such as "Captain Kangaroo", "Diff'rent Strokes", "The Smurfs" and "Fraggle Rock". Popular toys at the moment include the likes of the Easy-Bake Oven, Big Jim (action figure), Dungeons & Dragons and Cabbage Patch Kids.

Ronald Reagan was the President of the United States on September 3rd, 1983.

Margaret Thatcher was the Prime Minister of the United Kingdom on September 3rd, 1983.

Enter your date of birth below to find out how old you were on September 3rd, 1983.

Here are some fun statistics about September 3rd, 1983.

Have something to say about September 3rd, 1983?